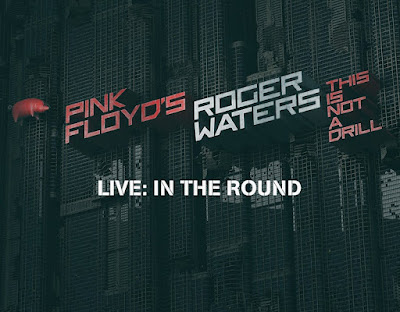 Roger Waters brought his overtly political This Is Not a Drill tour to Madison Square Garden for a night full of classics.
As the lights went down and massive video screens lit up the arena and a message Roger Waters appeared that told anyone who was in attendance strictly for Pink Floyd songs, but not to hear Roger talk about politics that they could more or less fuck off. It was a direct message to a crowd full of mostly boomers and while some of the remarks from the rest of the night were met with general applause, it was clear that some fans in the building really did just want to hear the hits. Regardless, Waters dove straight into it with a roaring "Comfortably Numb," which had overlays of a thunderstorm that shook the room, displaying the terrific sound set up and cranked volume that would dominate the rest of the night. As the screens rose to hang above the cross-shaped stage that was set in the round of the arena floor, Roger went directly into "Another Brick in the Wall Pt 2" which got people out of their seats and cheering as massive block letters delivered more phrases of protest and anarchy slogans to fit the political themes of the song itself. He kept the night segmented, playing suites of songs from Floyd albums with his own, newer solo material sprinkled in between and while the new songs were enjoyable, it was evident that the crowd wanted the anthems from his former group. By this stage in his career, Waters is no stranger to this fact and after years spent playing albums in full, seeing him break things up and spread out his discography was rather excellent. After playing "The Bar," a track written during the pandemic, he shifted back to Wish You Were Here material with an electrifying version of "Have A Cigar" on which his band ripped things to shreds, blasting away at mega riffs that saw the arena light-up with passion. As he continued on, words on the screen told the story of him and Syd Barrett seeing a Rolling Stones concert as teens and deciding to form a band once they moved to London for college as images of them as youths flashed in the background. Naturally he went into the album's title-track, the infamous song that soundtracked infinite mixtapes and playlists and became a guitar staple for anyone who picked up the instrument. Hearing the whole building sing it back to him was an emotional highlight and segueing it into a shattering rendition of "Shine On You Crazy Diamond," was monumental. Someone of Waters' status can get the top talent to perform as a backing band and it was clear he'd done a stellar job of finding people to bring these legendary songs to life with pristine replication. After a deep cut from Floyd's Animals, "Sheep," there was a brief intermission which slightly killed the mood of the evening and caused the next few songs to see interruptions as people were late to get back to their seats. It was certainly a vibe kill and the show would be vastly improved without it, but the back half of monstrous jams made up for it. Starting off with two more from The Wall, "In the Flesh" and "Run Like Hell" were surging with energy and magnetic guitar work that erupted with volume, grabbing attention and driving a sense of urgency that rippled over the crowd. While more political messages began to populate the screens, it felt a bit like mixed reactions were coming from the audience as messages defending Chelsea Manning's actions, calling for the release of Julien Assange, declaring "Fuck the Supreme Court," "Fuck the Patriarchy," and demanding reproduction, trans, and all together equal human rights. It was impressive to see Rogers to so bold and brazen with his messages and while I cheered for them, I felt awkward when no one else around me echoed the enthusiasm. However, once the screens cleared out and lasers began to appear, the attitude shifted and those who remained silent, began to cheer for the finale. As laser beams formed triangles over the screens, it was clear that the time had come for Floyd's greatest achievement, Dark Side of the Moon and Waters delivered by playing the entire second side of the album in its entirety, an unexpected moment for me. Even though a lot of these songs are sung by David Gilmour, hearing them with Waters on the chorus was a life-long dream come true. The stereo sounds of "Money" and the levitating "Us and Them" were real sonic treats, both exploding with volume, yet refined tuning. The guitars reached deep within and the backing vocalists towered above everything, while epic saxophone solos really cemented the greatness of the band. As the album art was recreated over the arena and the haunting laughs of "Brain Damage" bled into "Eclipse," it made the entire night worthwhile and left on a mark of sheer brilliance and a common theme of love and happiness felt through music.
Set list:
01 "Comfortably Numb"
02 "The Happiest Days of Our Lives"
03 "Another Brick in the Wall, Part 2"
04 "Another Brick in the Wall, Part 3"
05 "The Powers That Be"
06 "The Bravery of Being Out of Range"
07 "The Bar"
08 "Have a Cigar"
09 "Wish You Were Here"
10 "Shine On You Crazy Diamond"
11 "Sheep"
--
12 "In the Flesh"
13 "Run Like Hell"
14 "Déjà Vu"
15 "Déjà Vu (Reprise)"
16 "Is This the Life We Really Want?"
17 "Money"
18 "Us and Them"
19 "Any Colour You Like"
20 "Brain Damage"
21 "Eclipse"
22 "Two Suns in the Sunset"
23 "The Bar (Reprise)"
24 "Outside the Wall"
Posted by marc at 12:28 AM