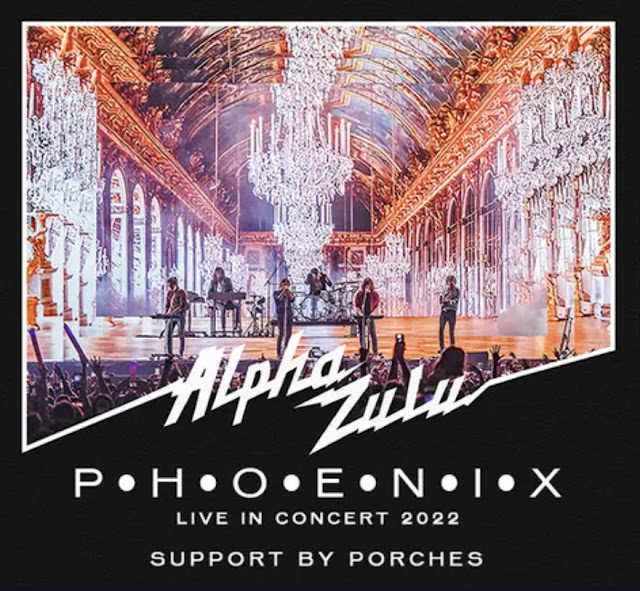 After announcing their new album earlier this week, Phoenix took the stage at Radio City and put on a show for the ages.
Phoenix have played their fair share of shows around New York City, including the infamous time they headlined Madison Square Garden and brought out Daft Punk for their last ever public concert (yes, I was there), but their set at the infamous Radio City was perhaps their best showing yet. As soon as the opening chords of “Lisztomania” struck, the crowd lost control and epic cheers filled the room. They’d last the entire night. To say their opening songs were all bangers feels like an understatement as the band unleashed absolute power turning their disco-pop tunes into balcony-shaking anthems, but “Entertainment” into “Lasso” was magical and following it with the forever chic and upbeat "Too Young" made it like a marathon run even though it was only the first four songs of the night. It was an astonishing display of focus and charm as smiles never left their faces and while it looked as if they were here to prove they’ve still got it, they also played with pure joy and unabashed enthusiasm. Even when Mars flubbed the opening lyrics to "J-Boy" and the band started over, he was cool and collected, "It's the third night in a row, but I've forgot the words, surely someone here in the front knows the first line, right?" He got it and they clicked back into gear like nothing ever happened, the sign of true pros. They sounded massive, each track coming through at an epic volume as their dueling guitar and synth line-up brought the heat while their drummer attacked his kit with precision and thunderous force. "Armistice" and "Long Distance Call" cut with a vengeance and delivered some of the hardest hitting moments of the night while the live debut of "Winter Solstice" lived up to its name and chilled things out.  To make the cavernous theater feel intimate, they reduced the stage’s proscenium and added layers of LED video screens to make it feel like they were in the dazzling video displays. Mind blowing images of grand palaces, deep space, and Al fresco paintings all came to life as the band blasted away through their stellar hits. Their sparkling rendition of “Love Like a Sunset” was moving and featured an incredible clip of satellite footage slowly zooming out 10 meters at a time until it surpassed 1,000 light years in distance before zooming all the way back to an image of a couple on a blanket, but it was the mashup of "If I Ever Feel Better" into  “Funky Squaredance” that truly took things to a new level as the guitar solo ripped with stunning brilliance. “This is the most beautiful place we’ve ever played” Mars said at one point and it did feel as if the band was pulling out all the stops for this one (perhaps for Mars’ wife Sophia Coppola and family friend Bill Murray who happened to be sitting behind me). The new tracks were special moments and “Alpha Zulu” sounded particularly triumphant, bringing new dance influences into the mix. For the encore, Mars and Deck D'arcy came back to do a special rendition of “Fior Di Latte” as an intimate piano ballad between the two with D'arcy donning sunglasses and gazing at Mars who casually leaned on the piano before climbing atop it to serenade the crowd. It was a cool moment, something new and different, to see a duo before the rest of the band joined as they kicked into “Trying to Be Cool” to start off a killer victory lap. In true fashion, the band closed with their career-changing hit “1901” which still gets a crowd to go crazy and sounded just as euphoric now as it did in its prime. Of course Mars turned to his usual trick and climbed the side of the theatre and up into the middle balcony as he made a full loop of the auditorium before pulling an Iggy Pop and climbing into the middle of the crowd for a final farewell before crowd surfing back to the stage to rejoin his bandmates. If Phoenix is a nostalgia act (the set was comprised mostly from 2009's Wolfgang Amadeus Phoenix) at this point, tonight suggested otherwise. Like the bird from which they’ve taken their name, on this night they rose from the ashes of their past reborn and better than ever.
Set list:
01 "Lisztomania"
02 "Entertainment"
03 "Lasso"
04 "Too Young / Girlfriend"
05 "J-Boy"
06 "Ti amo"
07 "Alpha Zulu"
08 "Armistice"
09 "Love Like a Sunset Part I"
10 "Love Like a Sunset Part II"
11 "Lovelife"
12 "Tonight"
13 "If I Ever Feel Better / Funky Squaredance"
14 "Winter Solstice" [Live debut]
15 "Long Distance Call"
16 "Identical"
17 "Rome"
--
18 "Fior Di Latte"
19 "Trying to Be Cool / Drakkar Noir"
20 "1901"
21 "Identical"
Posted by marc at 12:47 AM