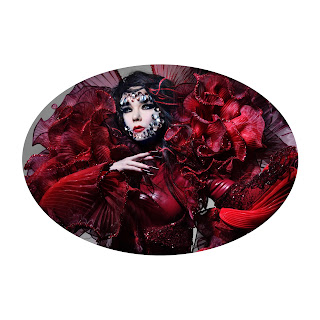 For the second week in a row, Björk has shared a new single from her upcoming record Fossora.
The idea of "classic" sounding Björk is wrong for some many reasons as each album seems to be a new artistic shift in both forms of creation, but also in the result itself. To say that Björk follows any kind of typical genre also feels misleading as she's constantly proven that while she has clear influences, her music is always something uniquely her own. That remains true, so far, as the rollout of her new album unfolds and "Ovule" continues to sound like no one else. In her usual tradition, she defies the norms of popular song structures and sings against the beat and rhythm of this track, which also bucks the notion of melody, and continues on her path as an artist building her own world of sounds. It's a journey into the abstract and absurd, nothing new for the legend, and it conjures up notions of Reggaeton beats mixed with symphonic orchestrations. It does sound a bit more inviting that "Atopos" at times, but this probably won't attract any casual listeners. When she shared the song, she posted the following alongside it:

ovule for me is my definition of love
it is a meditation about us as lovers walking around this world
and i imagine 2 spheres or satellites following us around
one above us that represents ideal love
one below us representing the shadows of love
and we ourselves walk around in the third sphere of real love ,
where the everyday monday-morning meet-in-the-kitchen-love lives in

As she continues to move further into her own ecosystem of sounds, her originality and creativity continue to shine unlike almost any other artist of her stature. She's gifted us so many moving and compelling songs over her illustrious career and while this might not rank on the level as some of her more accessible work, it still showcases a capital A Artist looking to constantly redefine their sonic palette.
Fossora is out September 30.
Posted by marc at 7:15 PM