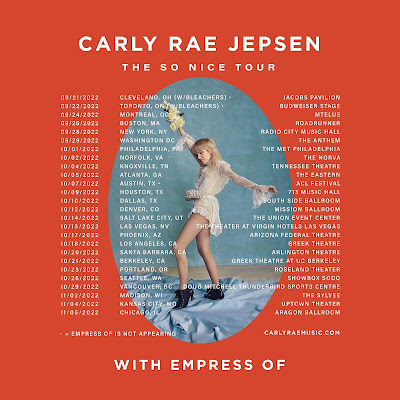 Carly Rae Jepsen will release her new album next month, but is already out on tour for promotion.
Usually an artist will wait until after their new album drops before they launch their tour, but Cary Rae just couldn't wait to get back on stage and bring the hits. After playing Coachella this past spring, the pop star is out on the road and while she waits for her new album to be officially released, she mostly stuck to her past as she played her largest NYC show yet. Carly wasted no time in bringing her shimmering pop hits to life with a stage decked out in fluffy clouds and neon stars as with a giant screen sitting atop a staircase that allowed for her and her two back-up singers to bust out some cute dance moves while she belted away her biggest and brightest bops. "Run Away With Me" was her third song of the night and it was an immediate dose of serotonin that got the entire crowd on their feet, a place they'd stay for the rest of the night. Nothing, however, was too minor for her fans as each track seemed to receive massive applause and each was sung along to with true passion and sheer force. She kept her talking between songs to a minimum and mostly shared that her new album would be out in October and how it was the same day Taylor Swift would be releasing her latest record as well (Carly didn't seem pleased with that) and how much she hates dating in her thirties (boy problems seem to still be one for her). While I've often felt that even her best songs are a bit too short, she benefits from that live with the ability to do an absolute marathon of a set and can pack in so many tracks that the show can feel epic in length, a good thing, to the point where you're left wondering, "wow is she really just going to play everything?" Newer song "Western Wind" held its own amongst past bangers, but "Beach House" still doesn't come across as anything close to her past glory. Still, hearing the biggest and best from Emotion and Dedicated truly made the night a triumph. "Want You in My Room" was a glowing sensation and "Too Much" was another sugary bop. Her backing band was great and gave the songs extra umph on stage, but never took the spotlight away from Jepsen who spent the night dancing from one end of the stage to the other living what seemed to be her best life. She did a mid-set costume change and gave the crowd a change to catch their collective breath before hitting right back into things as if no time had passed. "Party For One" was another great one that really saw Radio City come alive and I, for one, was pleasantly surprised to hear her bust out the ballad "All That" for the encore, giving us a bit of a comedown moment only to blow it all up again for the finale. "Cut to the Feeling" closed things out and with it came the biggest response of the night, the entire building dancing along and shouting each word with pure passion. For this show, she brought out the principal ballerina from the New York City Ballet to perform an incredible dance to the song that nearly brought the building to its knees, a truly remarkable and unforgettable moment that took the show to a new level. As she played the biggest NYC stage of her career, Carly left nothing to chance and proved that a could've been one-hit-wonder was never in the cards for her and anyone who thinks otherwise would surely be put to shame watching her now.
Set list:
01 "This Love Isn't Crazy"
02 "Let's Sort the Whole Thing Out"
03 "Run Away With Me"
04 "Too Much"
05 "Talking to Yourself"
06 "Julien"
07 "Warm Blood
08 "Emotion / Favourite Colour"
09 "Call Me Maybe"
10 "Stay Away"
11 "Comeback"
12 "Western Wind"
13 "I Really Like You"
14 "Want You in My Room"
15 "Now That I Found You"
16 "Your Type"
17 "For Sure"
18 "Go Find Yourself or Whatever"
19 "Beach House
20 "Boy Problems / Fake Mona Lisa"
21 "Cry"
22 "Party for One"
23 "When I Needed You"
--
24 "I Didn't Just Come Here to Dance"
25 "All That"
26 "Cut to the Feeling"
Posted by marc at 8:03 AM