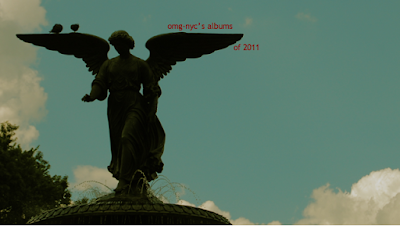 Continuing with my end of the year lists, here are my favorite albums of 2011. I'll finish things up next week with guest lists, but in the mean time Happy Holidays!
--

10. The Weeknd | House of Balloons
Almost over night, The Weeknd became 2011's big name in post-dubstep R&B. Spitting stylized rhymes over warped Beach House samples and embodying the essence of elusive and ever so smooth textures, the Toronto crew set forth an enigma that filed the black and white shadows and smoke filled beats of this self release mix-tape with uncanny ambition and strokes of genius that left the biggest names in the game wishing they could reach the level of this soulful conundrum. Silky smooth vocals over boisterous bass lines have become signature moves and although a lesser follow-up emerged later in the year (Echoes of Silence withstanding), the sultry swagger put forth is still grabbing attention. 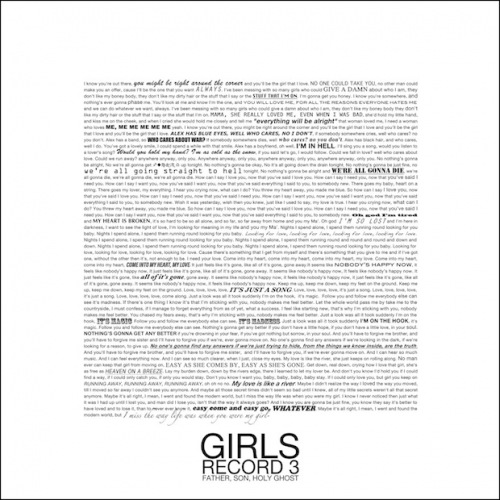 09. Girls | Father, Son, Holy Ghost
Christopher Owens will be the first to admit that Girls is the ultimate nostalgia ridden rock band in recent years. Rollicking riffs recalling the 1950s underline the duo's expansive follow-up to their impressive debut and displays the group reaching to new heights as showcased in the scorching "Die" and the shuffling "Alex" and "Love Like a River". Yet it's the classic crooning in "Vomit" that really displays the tremendous growth the band has made in such a short amount of time. While old school vices are certainly a prominent presence in the band's day to day life style which are clearly hinted at numerous times in Owens' lyrics, the bouncy and youthful flow of each track ads to the ambiance and mystery of any great rock and roll band.

08. WU LYF | Go Tell Fire to the Mountain
Early comparisons to Wolf Parade and Explosions in the Sky almost neglect the true originality of these Manchester natives who are daring enough to name themselves for Lucifer and greet listeners with a mighty howl worthy of any basement and far from the rungs of Radio City where the later comparison played a milestone performance earlier this year. Towering guitars are battered amongst vocals sifted through gravel as leader Ellery Roberts bellows over marching drums that come together at all the right moments before falling apart into intimate grooves all of which scream for camraderie and cult like tendencies that sit quite well with the trends of 2011.

07. James Blake | James Blake
Anyone who spent the year listening to this record through earbuds or laptop speakers has done themselves an incredible disservice. The majesty of Blake's songwriting skills might have actually been the biggest surprise on this record as his bombastic bass, warped beats, and suspended angelic vocals allowed for so much open space that his lyrics were able to fill an incredible void. The haunting crevices of emptiness, vacuum sucked emotions and brought frenzied distilled warbled production to the forefront and showcased that not only is Blake able to carry the weight of comparisons to the legendary electronic acts of Burial and Aphex Twin, but also prove that covering Joni Mitchell and Feist is right up his alley as well. 06. tUnE-yArDs | W H O K I L L
Through intricate loops of horn blasts, punching percussion, sqwaks, and steely guitar, Merrill Garbus produced a cacophony of tribal beats and worldly jams for one of the most infectious records of the years that simply screams 'party' with more enthusiasm than any other record this year. Her unique ability to create monumental moments that seem to climax into euphoria just before crumbling back into non-sequitar jams draws easy comparisons to Dirty Projects' 2009 classic Bitte Orca. However, the tribal tendencies exhuded by Garbus seem to end those comparisons in an immediate fashion. While Dirty Projectors exhibit a more invitation only sound, tUnE-yArDs live by the more the merrier attitude. Garnished in face paint and eccentric outfits (which many audience members replicate), Garbus has invited everyone to the party and serves as a great reminder that there is plenty worth gathering about and making some serious commotion along the way.

05. Real Estate | Days
On their sophomore record, Brooklyn-via-New Jersey upstarts Real Estate put some polish on their lackadaisical rhythms and set their guitars on cruise control for countless wasted miles. Sun-soaked intertwining guitars and simple melodies evoke soft spoken 70s rock and quintessential indie rock while hopelessly embracing the nostalgia of endless suburban settings. Tranquil and flowing vocals spill over effortlessly cool guitar licks that somehow never seem to grow repetitive and offer some of the most breezy songs of the year fit for all of your aimless drives. 04. Iceage | New Brigade
With slashing guitars that echo Wire and Gang of Four, these Danish teens broke onto the scene in 2011 before anyone even knew what they looked like or could figure out that the band name was actually just one word. Known for their abbrasive, loud, short (hell, the album doesn't even crack 25 minutes), and often bloody live performances, the hardcore quartet made quite the name for themselves and even landed a spot opening for Fucked Up on one of their first U.S. shows. Without giving anyone a second to breathe, they reinvigorated gloomy post-punk with a fresh D.I.Y. twist and in a year in which there was plenty to rebel against, helped give punk rock a refreshing face-lift.

03. Panda Bear | Tomboy
By now it should come to no surprise that Noah Lennox (better known as Animal Collective's Panda Bear) is a true master of sonic texture and layering sample over sample to create some of the most hymnal and sharp drones in indie music. Ditching the sprawl of Person Pitch's epic track lengths in favor for some more traditional times, Panda Bear was able to achieve some of the most mutilating sonic compositions of the year. Reverb soaked guitar drenched skewed sampled and still allowed for Panda Bear to be as questioning and charismatic as ever before, while still sailing forth into uncharted territory. More accessible pop opportunities that exist on his previous releases (both solo and as part of the collective) are not as apparent as one might have expected, this album is truly for the patient listener, however if you think you can guess what Lennox is going to do next, you have a lot to learn. 02. M83 | Hurry Up, We're Dreaming
Anthony Gonzalez did not do himself any favors when he described his new album as "very, very, very epic" months before it was officially released. However, when lead single "Midnight City" hit the internet this summer, he seemed to turn any doubters into believers and when the double album dropped this fall, anyone still on the fence seemed to leap over in excitement. Combining soaring shoegaze guitars reminiscent from his early (and also phenomenal) work and the recent styles that reflected John Hughes' film soundtracks, Gonzalez and company complied over twenty intergalactic jams that launch listeners into the cosmos without retreading on a single note from the past. Upon first listen, a friend said to me "I wouldn't be surprised if this launches them to the next level" and that is exactly what this album has done.

01. Fleet Foxes | Helplessness Blues
"I'll have so much to tell you about" only begins to describe the journey Fleet Foxes set out to embark upon this year with the release of their second record. The liner notes describe ring leader Robin Pecknold as a 'prophet' and after joining the band's celestial voyage through the lens of a wide-eyed walker wandering towards the dawn, it is difficult to argue this statement. Even with a band as profound as Fleet Foxes, the gang is still full of wonder and uncertainty that fulfills the listener with incredible amounts of hope and aspiration that the wonders of an illustrious rock band seem to be the furthest thing from their minds. Dreams of working til you're sore and soon owning the store are not those typically associated with the most promising musical group in recent time, however that seems to be where Fleet Foxes separate themselves from the rest of the pack. These woodsman are still longing for a person as bewildered by the world and as full of imagination as they are and they present their joyous ambitions through golden autumnal melodies and voices as pristine as the lights hung in the night sky.
Posted by marc at 12:55 AM