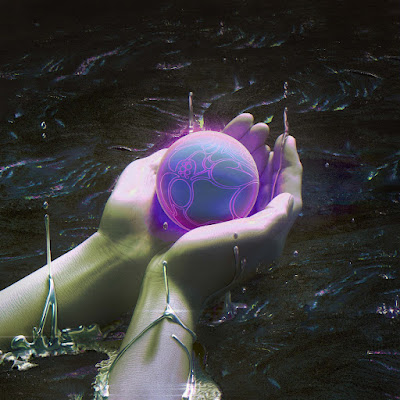 On Friday, Magdalena Bay will release the deluxe edition of last year's awesome Mercurial World and today they've shared another unreleased track.
"Unconditional," one of several new and previously unreleased bonus tracks from the deluxe edition of one of my favorite albums of 2021 is a squelching pop song that features laser-sharp synths, funky basslines, and the breathy vocals that channel '90s pop with their otherwise futuristic sound. Once again, the production on this sounds immaculate and the song drips with throbbing, groovy basslines that are sure to hit deep in your soul. Twinkling piano, punchy keys, and other cosmic twangs all come alive here as well to take us further on the duo's journey into interstellar pop. In a press release, the band describes "Unconditional" as the "weird little cousin" of their Mercurial World single “Secrets (Your Fire)," and they say that the "Unconditional" video is their "dream birthday party."
Mercurial World (Deluxe Edition) is out September 23.
Posted by marc at 6:40 PM

The consistency and the thoughtfully chosen, repairable parts of the Prusa Mini+ will please extra advanced users who want a reliable 3D-printing machine. It’s also a bargain, with uncommon features at this value similar to a large, 7-by-7-by-7-inch printing area and a shade display, as well as|in addition to} 24/7 customer help. Prusa printers are the quietest models we’ve tested, too, and they’re compatible with broad range|a variety} of plastic types. The FLSun V400 doesn’t sacrifice high quality Baby Bottle Warmers or build volume in trade for all that velocity. Its high-flow nozzle and volcano-style hotend retains the filament flowing smoothly for splendidly detailed prints. The printer has a roomy 300mm round build plate and may match items as much as} 410mm tall.