At the beginning of the past decade it looked like Interpol was going to be the next big thing along the lines of The Strokes and The White Stripes. They were a bass booming band from New York and the guy sounded like Ian Curtis. Then things went a little sour. People didn't really like Antics as much as me, and their third release, Our Love to Admire, was when they really dropped the ball. But hey I'm never one to count someone out and the band stated at the end of last year that their next album was going back to the sound of Turn On the Bright Lights. Well the first song, entitled "Lights", is up for grabs on the band's site and by the sound of things (heavy bass and reverb) they are moving in a backward step (that's a good thing BTW). Here is to hoping the album follows through with that promise! Aside from my birthday, Record Store Day may be my most looked forward to day of the year. It celebrates everything I love (bands, vinyl, performances) and packs it all into one awesome day. For the third year in a row independent record stores have celebrated this event with super limited releases, re-issues, and other awesome merchandise from genre crossing artists and labels. This year I picked up a Neil Young 7", a MC5 7", and a re-issue of the epic Modest Mouse classic The Moon and Antarctica on double 180 gram vinyl. To top the day off I headed back to NYC hot spot Other Music to catch an intimate performance of The Drums and The Pains of Being Pure at Heart. These aren't the types of shows I attend to see amazing performances, but merely to be a part of such a unique experience. The reconfigured store was jam packed with fans as the two bands ripped through their respective sets. TPOBPAH were my main draw for the evening as I have missed seeing them in the past and couldn't resist a FREE chance to see them up close. They rocked through lush, keyboard heavy, dream-pop that cracked the tiny speakers in the shop when the jangly guitar recalled 80s feelings of the Smiths and Jesus and Mary Chain. Favorites such as "Teenager in Love" and "This Love Is Fucking Right" were accompanied by new tunes that challenged the awesomeness of their previous numbers. In between songs the band mentioned their love for the store and the whole record day experience showing just how much this day can really bring together a community of people.
Posted by marc at 11:29 PM No comments:

Email ThisBlogThis!Share to TwitterShare to FacebookShare to Pinterest
Labels: live show, Record Store Day, review, The Pains of Being Pure at Heart 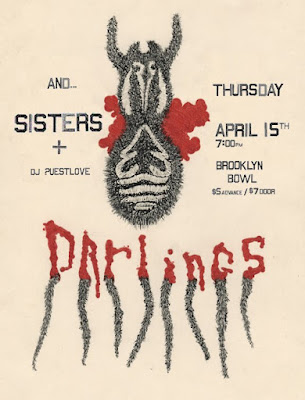 Brooklyn garage-pop ensemble Darlings got some buzz during the city's CMJ festival and recently did a stint at SXSW, however they have yet to get a real steady following. Their guitar fuzzed pop sound had lots of room to fill at the large Brooklyn Bowl and the early set time really prevented any sort of audience from packing the place. The squealing voice from the spastic guitarist matched up pretty well to the band's recordings however the band seemed to lack a sort of energy needed to make the songs really explode. "Eviction Party" could have got people moving had there been enough of a crowd and set closer "If This Is Love" really nailed the night for me. Perhaps these guys need to stick to smaller places for the time being until they can get enough people to really rock the walls.
Posted by marc at 8:08 PM No comments:

After waiting in line for seriously hours, many feared that this night was never going to happen. Around 9:30 Franny and I made our way into the jam packed Roseland Ballroom and tried our best to squeeze our way to the front of the stage. We actually lucked out and got a supreme view from the first row all the way to the left, which pretty much highlighted Thom and Flea for the entire evening. When Thom released The Erasure back in 2006 many felt that it was a watered down version of something that Radiohead would produce and it received lack luster reviews. Well after witnessing the songs performed live, I would say all of those reviews have been put to shame. The new band really breathed a new life into each track which on record now sound too simple and on an album highly relying on dub-step like beats, Flea showed why he was the clear choice on bass. Also I don't know if there is a more fitting partner to Thom's quirky dancing them the frantic pulsing and shaking of Flea. Even from the opening track "The Erasure" his chemistry with Thom shone as they dueled their strings to the end. The only time a song felt basic and plain was on my personal highlight from the album, and now band name, "Atoms for Peace" however the rest of the evening really made up for any forms of disappointment. There was a brief pause as the band finished the full album until Thom came back onstage and debuted his live acoustic cover of "All For the Best" followed by the elusive yet beautiful Radiohead track "Fog (Again)" which nearly brought me to tears until my heart raced for a solo piano version of "Everything In It's Right Place." This portion of the show really allowed to Thom to connect with the audience in a way rarely seen when backed by his normal bandmates. The rest of Atoms for Peace joined him for another Radiohead b-side and the final songs of the night.

All For The Best (solo)
Fog (Again) (solo)
Everything In It's Right Place (solo)
Paperbag Writer
Judge, Jury, Executioner
The Hollow Earth
Feeling Pulled Apart By Horses
Posted by marc at 12:04 PM No comments:

I keep thinking about this list every time I come home and finally decided to write it. A few summers back some friends posted the five records that shaped the way they listen to music and being back in this town does nothing but remind me of growing up. So here are what I think are the five records that really influenced everything I listened to past and present.

1. The Beatles - Sgt. Pepper's Lonely Hearts Club Band
I cannot think of a single album that I have probably listened to as much as this one. Some of my earliest memories of not only music in my life, but just life in general are when my dad would play this album and sing along. It has always been my favorite record of all time and I can not realistically see that ever changing. It combines everything I love about music and fuses classic rock riffs, psychedelic lyrics, a sitar, and finished with arguably one of the greatest songs ever written.

2. Green Day - Dookie
This album made it's way into my possession sometime in middle school. I remember my dad owning the cassette and listening to it in the car when I was younger, but it wasn't until later when it would really opening my ears to punk music, despite the fact that it had already been almost a decade since Green Day had 'sold out.' 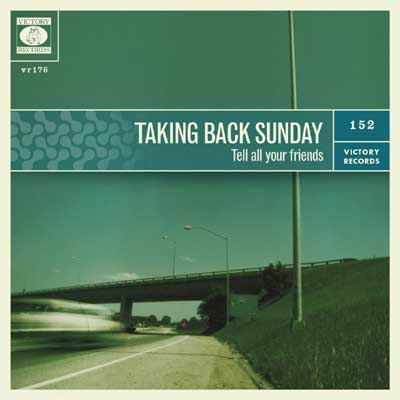 3. Taking Back Sunday - Tell All Your Friends
Out of all the records on this list, this is the one that has faded. The songs don't hold up anymore, but the memories that come with it will never go away. I remember hearing it for the first time in eighth grade and it opening a whole new world for me. Not only in terms of what would later be called 'emo' but also a new world of people. In a small suburban town, this album introduced me to people I still know to this day and established friendships that made high school worthwhile.

4. The Strokes - Is This It?
This was the first record I ever bought that made me feel cool. The Strokes revived rock and roll in the early 2000s and highlighted the New York scene. It was this album that inspired me to go to college in NYC, change the way I dress, grow out my hair, and countless other things that to this day I consider it one of my top ten favorite records. This was the band that made me want to find the next big thing, the next shift in music. And I'm still looking.

5. TV on the Radio - Desperate Youth, Bloodthirsty Babes
In my junior year of high school I downloaded this album and opened my ears to experimental music. This was not poppy and radio friendly, but in fact raw and underground. The noises that came off of this record were harsh, yet for some reason it called to me as something new and something I needed to hear more of. It led me to sounds pouring out of Brooklyn and gave me some hope that cool had not left New York and possibly would still be around when I would arrive two years later.
Posted by marc at 5:02 PM 3 comments: