LCD Soundsystem wrapped up their four night home town stint at Terminal 5 last night with their traditional house rocking tendencies. Despite performing the same set list all four nights the intensity on the final performance was still spot on. James Murphy and company rocked a wide selection of tracks all containing the dancy disco beats, post-punk bass, and krauty guitar which LCD is known. While Murphy's side comments were entertaining between songs, the man's song writing skills have certainly grown as time has progressed. Sound of Silver was certainly acclaimed by the blog world and This Is Happening may be even better. Murphy surely does his homework while crafting his tunes as his influences are highly visible throughout each album (listen to "All I Want" followed by David Bowie's "'Heroes'". However while his punk ethos remain true, his performance is unquestionably top quality. His backing band sounded flawless ripping through solos and moving the crowd for roughly two hours. Long time fans were rewarded and vividly apparent for classics such as "Daft Punk Is Playing at My House" and "Losing My Edge" but new favorite "Drunk Girls" catapulted the audience into a frenzy. In addition to the stellar musicianship ,a pulsating light show assisted in the intensity of the show. Main set closer "Yeah" lost the audience in a haze of fog accompanied by alien green lights and throbbing strobes. However it was home town anthem "New York I Love You But You're Bringing Me Down" that, well... brought the house down especially when the chorus to Jay-Z's "Empire State of Mind" was added and ushered out what is rumored to be the last LCD tour. Although James assured us he'd be back to New York.

Setlist:
Us v Them
Drunk Girls
Get Innocuous
Yr City's A Sucker
Pow Pow
Daft Punk is Playing at My House
All I Want
All My Friends
I Can Change
Tribulations
Movement
Yeah
--
Someone Great
Losing My Edge
New York, I Love You But Your Bringing Me Down 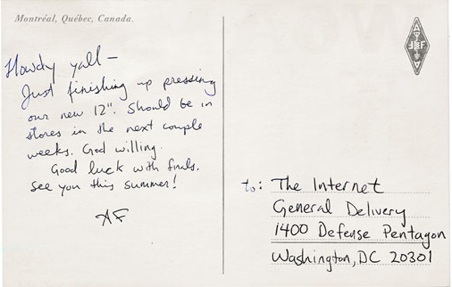 The end of school has once again resulted in a lack of posts. However Arcade Fire seem to understand as they wish "good luck with finals" in a recent post stating that their new single will be here in the coming weeks!
Posted by marc at 1:08 AM No comments:

Summer finally hit New York City this past week just in time for a night of hazy pop music. Chillwave outfit Washed Out kicked things off with his bass heavy fuzz jams recalling 90s beats and lo-fi swirling vocals. The muddy choppy sounds were a fitting start to the majestic sounds that Beach House would soon deliver. As the opening sounds of "Walk in the Park" resonated through Webster Hall it was clear that the band had descended from the heavens and brought their silvery sparkled moon rock set with them. The drizzling guitar put the hall in a trance completely under the control of Victoria Legrand's booming cosmic voice. Of course certain numbers were the highlights of the evening, the set list comprised all of Teen Dreams. While all three albums were represented it was the new tunes that rocked Victoria onto the floor. We were even treated to the debut of a new song called "White Moon." The show was droning and melodic, but by the time "10 Mile Stereo" was ringing out the night, I had been won over. Everything from "Gila" to "Master of None" to Take Care" was brilliant; each a simple sun-drenched pop song.

Setlist:
Walk in the Park
Lover of Mine
Gila
Better Times
Norway
Silver Soul
Master of None
Astronaut
White Moon (new song)
Used to Be
Zebra
Heart of Chambers
Take Care
--
Real Love
10 Miles Stereo
Posted by marc at 1:53 AM No comments:

Email ThisBlogThis!Share to TwitterShare to FacebookShare to Pinterest
Labels: Beach House, live show, review
Newer Posts Older Posts Home
Subscribe to: Posts (Atom)
Stream of conscience blogging covering my thoughts on indie rock, electronic, punk, noise, and pop. I live in Brooklyn, like to make lists, and am trying to listen to more hip-hop.
Thanks for reading!