I only attend one show for CMJ this year, but I made it count. Saves the Day played the Knitting Factory last Saturday with a ton of other bands that I missed. This was the second time I saw these guys, saw them at CMJ last year too, and both times have been acoustic performances. The intimate setting of the KF is perfect for these performances and the crowd made it that much better. Everyone singing along to all of the songs in a tiny packed room is exactly how these songs should be played. Everything was slowed down to the perfect degree and Chris sang each song with such passion. The set was really well mixed between their much favored old material and songs from their forthcoming album. Usually I cannot stand when the person next to me is singing louder than the band, but when the whole crowd was in unison, especially for the encore which consisted entirely of requests, everything felt right in the world.

Justice played a second show at Terminal 5 Monday night accompanied by the Midnight Juggernauts. This venue is brand new and was a perfect location for these French hipsters. It's basically a building that has been gutted leaving only iron beams, painted white, and a stage. In other words a giant steel cage. The Juggernauts kicked things off with their indie-disco rock sound that seemed to get people to do some bouncing. However nothing compared to when the 3 x 3 set of Marshalls was unveiled with a giant neon cross in the middle. When the opening beats of "Genesis" began to pump the crowd went into instant frenzy. Some weird combination of moshing and dancing that only seemed appropriate for this strange mix of New York hipsters and what was the biggest gathering of French people I've ever seen outside of Paris. While I'm sure they're no robots in a pyramid these dudes got people moving. The strong opening got the energy flowing in such a way that I almost did not notice when things got slow in the middle of the set. Not until the epic rendition of "We Are Your Friends" came out of the speakers did I notice I had almost stopped d.a.n.c.i.n.g. That song transcend this "rave" into a giant choir when the house lights came on for the chorus, which could only be stopped by the amazing remix of Metallica's "Master of Puppets," until the show ended and everyone just kept chanting "we are your friends, you'll never be alone again" well into the streets.

Hot Tracks:
While I am currently living here in New York I know where I came from. Let's go sox!

I don't usually do record reviews, but I might have my blogger license taken away if I did not do this.

Radiohead could certainly be considered the biggest band of this generation and the release of In Rainbows just helps prove that. Since the announcements of the album’s release date, a mere ten days before the album was made available, the music world has been set off course. Never before has the anticipation of a single record had such an impact on the music community. With the gap between In Rainbows and Hail to the Thief being the longest gap in the band’s history the excitement amongst fans has grown to huge proportions and the band has not let anyone down. Although this is the most simplistic record the band has released since their debut album it is anything but a disappointment.

The album is a grower. The more you listen the better it becomes. The haunting voices and sounds that come from the depths of the album leave listeners with feelings untouched since Kid A. The album has a natural progression that only Radiohead can achieve. Since many of the songs have been in the process for years now, fans had many ideas of what to expect of this album and still the band threw in some surprises. This is probably the first time since Ok Computer that Thom’s voice has been so instrumental in an album. His falsettos are gorgeous and add a whole other layer to the songs. The guitars were turned up, way up, in all of the right places. “Bodysnatchers” is one of the bands most rocking songs in recent years. Great riffs and sounds that echo “Paranoid Android” are frequent throughout the entire track. The middle is perhaps where the album comes into it’s own. Things get slowed down and the minimalism really picks up. The new rendition of “Nude” is amazing and the orchestration of “All I Need” may be some of their best.

Radiohead is the biggest indie rock band in the world at the moment and the best thing to come out of England (music wise) since Pink Floyd. They are the closest this generation will come to having The Beatles and this is their white album (listen to “Julia” and Faust ARP” back to back). They have already made their Revolver and Sgt. Pepper’s and now they are proving that they can still make mind-blowing music without completely reinventing their sound. They are on top of the music world in every possible way and nothing (record labels, album leaks, bad press) seems to be stopping them.

I saw The Darjeeling Limited last week and was very impressed. Definitely Anderson's best since Tenenbaums. Once again there are amazing characters and a great story line. Some complain that his movies are all just crazy families in situations that are completely ridiculous, but that's what I love about them. Owen Wilson is excellent in this film and I hope he realizes that. There is a short film that proceeds the full length so I recommend that you watch that before seeing Darjeeling. It just gives a little more understanding to the film. The short film is called The Hotel Chevalier and is available for free on iTunes.

The music world is currently off-tilt due to the announcement from the biggest band in modern rock. Radiohead officially announced the release of their seventh album In Rainbows today. It comes out on October 10, yes ten days, and it costs however much you want to pay. The record industry is about to be completely fucked. The band is free from a major label and are about to release the most anticipated album of the last few years. With only ten days of notice, no advanced copies, no leaks, no huge marketing campaigns, and only digital download from their site until December, Radiohead is about to revolutionize the music industry. Also they are taking it one step further and offering a "diskbox" package which includes the actual cd, two heavyweight vinyl copies, and an extra cd with additional new songs. The bad part is it costs about $80 and it does not ship until December 3rd. However, it is Radiohead and they are quite possibly the most important band of this generation.

In other news, I saw Animal Collective last night at Webster Hall. I did not know what to expect from these guys. I had heard that usually they play nothing off their albums during live shows and only work on new material. However, with the recent release of Strawberry Jam the guys played a decent amount of older tracks. Only three of the members graced us with their presence and they seemed a little bothered with things. During the excellent new jam "Fireworks" Avey abruptly stopped the song complaining of too much bass. The lights were fantastic and the songs sounded great, however the crowd lacked energy and it was a missing link.

Hot Tracks:
Keep it scene in the city.
Posted by marc at 11:50 AM No comments:

Email ThisBlogThis!Share to TwitterShare to FacebookShare to Pinterest
Labels: Animal Collective, Radiohead
I'm giving this to you before Rolling Stone. 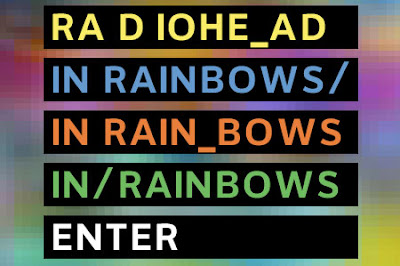