The War on Drugs - "Oceans of Darkness" / "Slow Ghost" 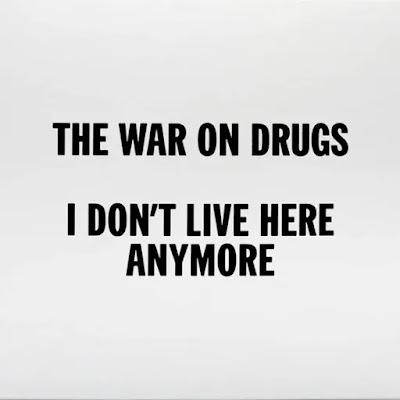 The War on Drugs have shared new songs with the deluxe edition of last year's awesome I Don't Live Here Anymore.
It's still too early to expect a new album from the War on Drugs, a band that is known for their painstaking recording process where they obsess over every small detail. In fairness, the obsession has recently led to three remarkable albums that position the group as one of the country's best rock bands. However, with the deluxe edition of  I Don't Live Here Anymore comes two new songs. "Slow Ghost" is a really good track that has the makings of a nice b-side or outtake. Delicate piano, the aching of Granduciel's voice, and acoustic strums all make it a song worthy of release, but you can probably understand why it wasn't on the album. Still, it would at the very least make a great transition song and it'd be hard to consider something so sonically pleasurable a "filler" song, but it certainly doesn't hit with the same intensity and weight of the triumph that is "Oceans of Darkness." No, this one is is a stunning track that arguably could be one of their strongest singles. It immediately hits with crashing drums and soaring guitar lines that once again hit their stride with heartland rock synths and epic emotional power. According to band leader and main songwriter Adam Granduciel:

One night in LA, while we were many months into working on what would be I Don’t Live Here Anymore, Dave [Hartley] uncovered a stripped down demo in my dropbox called "Oceans of Darkness," and insisted we try recording it. We were frustrated and exhausted at the time, but we set up in a circle after dinner and worked it out as the tape was rolling. It’s rare that a song of ours could feel this complete after only a few takes, but it had all the desperation and urgency that we had been looking for. Ultimately I didn’t include it on the record because I couldn’t find a home for it among the other songs. We’re happy we can share it with you now.

It is a sweeping song and to learn the band got it done in minimal takes is a truly impressive feat. There's a lot of velocity in this one and the band's been mixing it into their setlist on their latest tours. Hearing it alongside their other standouts must make it feel like a staple and hopefully it'll remain in their set for years to come. This is a truly wonderful song and hearing it now is like seeing a beacon of light in the darkness or finding buried treasure deep within that dark ocean. An almost lost gem that has turned out to be yet another pristine piece of work in their already profound discography.
The deluxe edition box set of I Don't Live Here Anymore is available to order now via Atlantic Records.
Posted by marc at 6:11 PM