Following some of the worst rain New York City has ever seen, this past week has been absolutely gorgeous. The past weekend was amazing , it was sunny and temperatures reached the 80s. It seemed like everyone was in the park this weekend, not that I can blame them, and it seems like spring is finally here.

I saw Les Miserables last Saturday and I don't think I can say enough about this show. It is by far the best thing I have ever seen and now I've seen it on Broadway. The cast was fantastic, Lea Solanga blew me away, and everyone should go see it while it is back in New York. I believe it is closing in August so hurry and see it while you can.

On Monday night, Jen, Mary, Margot, and I went to the MET for the college night opening of the new Greek and Roman exhibit. It was a huge toga party with college kids from all over the city. It was a really cool idea for the MET as it was free and there was dancing, tours, food, and drinks. All though I think we had more fun walking through the city in our togas than we did at the actual event.

Tuesday night Jen, Margot, and I went to see Patti Smith for the last of her three shows in the "Bowery Sessions." It was the release of her new CD "Twelve" so everyone got a free copy with their admission. It might have been the best show I've been to all year and I think everyone should go see Patti if they ever have the chance. The woman was amazing, especially since it was her third show of the night, even though she was a little intoxicated. She kept rambling on and on in between songs, which was just as entertaining as seeing her sing. The set was all covers off her new album so it was a unique feel. She wooed the crowed from the moment the show began and it was non-stop until the closing chords of "Gloria." 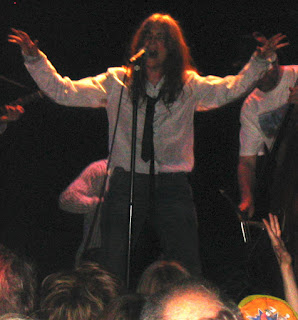 In other news... festival time is upon us again. Coachella kicks off tomorrow with what appears to be one of their most promising line-ups ever. Tickets sold out long ago so if you're going have an amazing time and take pictures for all of us unable to attend. Lollapalooza announced thier line-up a few weeks ago and it's not a surprise that it looks like this festival is going to be amazing as well. Performers include: Pearl Jam, Daft Punk, Ben Harper, Patti Smith, Kings of Leon, Regina Spektor, Interpol, Modest Mouse, Yeah Yeah Yeahs, TV On the Radio, Clap Your Hands Say Yeah, and many many more. This could be one of the most promising line-ups out there right now. Bonnaroo is also coming up in less than 50 days and they will also be delivery quite the performers. If you can make it out to any of these festival I highly reccommend it.

Keep it scene in the city!

In a time when the music industry is not what it once was there are some questions that need to be raised. What is the fate of the way in which people obtain their music? I think the age of the CD might officially be over. How many people honestly go to their local record store on a regular basis to pick up the latest cd from their favorite band? People download music, legally or illegaly it is something that happens and won't go away. So clearly there is less music to be made from record sales. However performances are where artists make their money. A few years back Bruce Springsteen played numerous consecutive sold out shows at Giants Stadium and made more money from those shows than he ever did due to record sales. Now here is my question: clearly people are doing pretty well with ticket sales if this is happening, but how much should someone charge for a concert ticket?
When I go to a show I have a very difficult time paying over $30. There are some cases in which I make an exception (Festivals, a reunion, Radiohead, a living Beatle), but it has to be pretty great for me to pay a lot of money. I recently broke my own rule when I shelled out about $45 to see Arcade Fire headline David Bowie's festival in New York (I'm hoping Bowie will make an appearance as he loves these guys). I've reasoned the fact that I didn't pay for their albums and the last time I saw them I didn't pay, so I can handle paying that much for these guys. Now after that, I'm having a difficult time finding shows that I am willing to pay the asked ticket price. Tonight I passed up an oppurtunity to see Iggy and the Stooges because I refused to pay $70. Isn't rock and roll supposed to be about the music and sticking it to the man not paying a shit load of money to see a fucking punk band in a venue way the hell uptown where I'd be confined to a seat? Where are the $10 shows where the bands actually need to have a sold out show to make money to keep the tour going? In a few weeks I'm going to see Piebald and MC Chris play the Knitting Factory for $10. This I can handle. Two great acts actually playing the same show and pouring their hearts into the performance because they love their music. They actually get along and aren't playing songs they wrote 30 years and charging $400+ for seats, coughthepolicecough.
Basically when will the point come when I need to raise my price so I can actually go see shows?