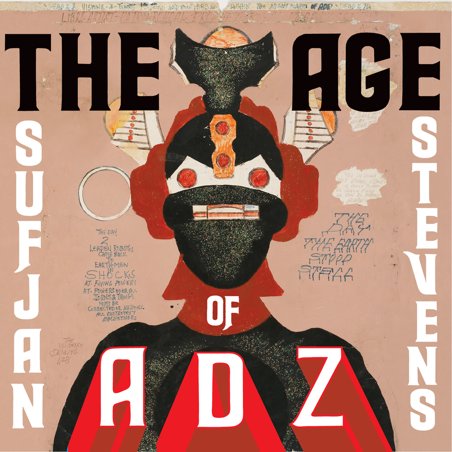 The internet seems to have gone into a slight frenzy over the past few weeks over baroque-pop/indie folk superstar Sufjan Stevens. It all began when his label Ashmattic Kitty posted dates to his first proper tour in a few years, followed by an instantly available EP entitled All Delighted People. Then yesterday came the announcement of his first proper LP since the glowing Illinois, called Against All Adz and today the fourth track on the album is streaming at his bandcamp page. It seems good things have finally come after the years of waiting. Electronic drums have replaced the orchestral nature associated with Stevens, however the angelic voice and choir seem to fit quite nicely amongst the new arrangements. Listen to the track below.

Buke & Gass - "Your Face Left Before You"

Before Buke & Gass appeared on Stereogum's Quit Your Day Job and before they opened for the National in Europe, I reviewed one of their early shows which gained a spot on the band's press page. Now Stereogum is previewing two new tracks from the bluesy/folk duo. These new tracks keep in tradition with the steel fast paced strumming and one-two kick drum beats of earlier tracks and still sound like a refreshing take of the Yeah Yeah Yeahs. Hear the tracks over at Stereogum.
Posted by marc at 9:09 PM No comments:

Email ThisBlogThis!Share to TwitterShare to FacebookShare to Pinterest
Labels: Buke and Gass, song

Not too many people would have the audacity to walk on stage, blow torch in hand, and proceed to light their front woman's cigarette. Then again, not everyone is Jack White. The Dead Weather was in full force from the moment they graced the stage. The all-black-everything entourage attacked the stage with pristine white guitars that were used as battle axes as they attacked the stage with their raw sound. Alison Mosshart prowled the stage taking complete command of each song as White's drumming thundered between wails on guitar and tight thumping bass. Song after song pummeled the crowd, showing that their strong suit really is in the live performance, as the set built to the electrifying "Will There Be Enough Water?" Once Mr. White strapped on his six string there was no turning back. He ripped through the track while sharing lead vocal duties and microphone battles with Mosshart. Despite being behind a kit instead of his usual lead, White still ran the show, top hat, feather, and all. His fills on the skins were pulsating all evening however, on both the occasions he took duty on guitar his true talent was unveiled. Few have been as productive as Jack White in this past decade and while I still believe that neither of his recent projects have matched the brilliance of the White Stripes, the Dead Weather truly earned much respect last night.

Email ThisBlogThis!Share to TwitterShare to FacebookShare to Pinterest
Labels: live show, review, The Dead Weather
Newer Posts Older Posts Home
Subscribe to: Posts (Atom)
Stream of conscience blogging covering my thoughts on indie rock, electronic, punk, noise, and pop. I live in Brooklyn, like to make lists, and am trying to listen to more hip-hop.
Thanks for reading!