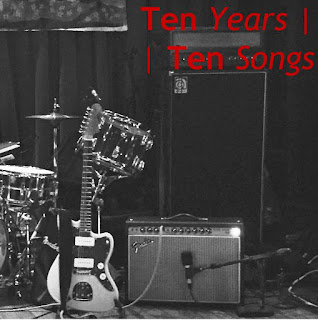 I've spent the past decade writing about music and my time in New York. It's one thing that makes me feel connected and relatable to everything around me. Over ten years, I've written about countless songs and concerts, but I've selected ten songs from the past ten years that feel really special to me. Thank you to everyone who has ever read any of these posts.

"Wolf Like Me" came out the summer I moved to New York. It was the summer anthem I needed and helped remind me why I was moving to the city in the first place. It’s strong hooks and buzzing guitar were both experimental, but straightforward. It’s a rock song that still finds a way to invert itself and remain true to the band’s eclectic song. TV on the Radio never reached the heights of this song again, but perhaps the magic that it contains was all about the moment. That’s what makes a song great. It can be released and feel the perfect meaning for your life at that moment and bring you back every time it cracks out of a speaker.

The song of a decade and a generation. It’s a lofty title, but LCD Soundsystem’s “All My Friends” is undoubtedly worthy of such great honor. The jumbled piano ignites emotions right off the bat and holds them high for over seven minutes. Still, it’s not your four-to-the-floor beat that your typical party anthem abides by, but the elements are still intact. LCD were New York’s new house band by the mid-aughts following the Strokes and “All My Friends” was the city’s anthem. It immediately brought back feelings of the 70’s and felt relevant all at once. It was danceable nostalgia and nearly a decade later, as LCD enjoys a reunion lap, the song still feels powerful and monumental. It’s a time capsule that feels as prevalent in it’s un-earthed reunion carnation as it did the first time you played at your party. When the piano begins to rumble and the feeling wash over and you think to yourself “this is how it’s supposed to feel”, it was instantly iconic song that I wouldn’t trade for anything, except to maybe be with all my friends tonight.

In some ways, it’s hard to think that Beyoncé wasn’t always Beyoncé. Well, she’s always been Bey, but there was a time before and after she was the undeniable Queen. Yes, she had previous singles that dominated radio and were meme-generating before memes were even a thing (to the left, to the left anyone?), but “Single Ladies” was her world conquering hit. Sure, in the time since, Queen Bey has gifted us with two masterful pop albums, her self-titled and this year’s luminous Lemonade, but “Single Ladies” made it all possible. It felt inescapable, and not just upon its release, but for what seemed like years afterwards. It made a dance move almost as ubiquitous as Michael Jackson’s “Thriller”. It caused Kanye West to run onstage and grab a microphone from a trembling Taylor Swift, putting her name in the stars as well. It cemented her stardom into infinity and beyond.

When the xx made their first impressions, there wasn’t much of a mark. The, at the time, quartet made sparse music that felt hollow and minimal. It wasn’t necessarily something new, Young Marble Giants had a similar sound twenty years earlier, but the xx found a way to make their quiet, bedroom-pop sound massive. You can’t quite imagine Lorde’s “Royals” existing had the xx not come first and the chillwave impression that blossomed shortly after also owes a huge debt to these British teens. It was a song and album that was almost too good to be true. Something that was so perfect that band has spent quite some time trying to figure out exactly what to do next. It’s a problem many face, but many weren’t so on the money in the first place.

Beach House didn’t always seem destined for the stars. After their first two records, their dusty, crackling dream-pop felt minuscule and personal. Something you’d always expect to find in back-room bar or basement, not something that would be playing the main stages at festivals around the world. Everything changed with the band’s third album, Teen Dream, and more so with the luxurious and masterful “10 Mile Stereo”. The grandeur and majesty was something so beautiful and complex, and transformed their sound. It was like finding a classical painting and peeling back the years of tarnish and finding a true spectacle. Now, Beach House are one of the adored and prolific artists in indie rock, but “10 Mile Stereo” is where is all began. It’s when the duo from Baltimore broke out of the crystal ball and headed straight to the stratosphere.

The nocturnal vibes of the Weeknd’s debut mixtape are haunting, dark, and intimate. Nothing you’d expect of the Weeknd these days, but back when he was using woozy Beach House samples and lifting an indulgent portion of Siouxsie and the Banshees, the Weeknd was a character shrouded in mystery. He never spoke to the press and it took over a year to see the man finally get on stage. “House of Balloons / Glass Table Girls” is, as the title suggests, really two-for-one. A song of split personality quickly jumps on its head and goes for a completely different spin. It was a party rocking track that felt like a star in the making, albeit it felt like a Burial situation, not someone that would be belting alongside Ariana Grande. I’m glad we got the latter, but going back to revisit this overpacked song, I can’t help but be reminded of all that could have been.

The Men turned out to be a flash in the pan, but for two years, they were emerging as the return to awesome New York punk band of the future. Their sound was raw, dry, and packed a hearty punch. “Turn It Around” roars in strong and rocks hard for nearly four minutes, ripping through fast riffs and rock-solid rhythms. The record release at 285 Kent saw the New York Times in attendance and almost sparked a feeling that the end of the Williamsburg DIY would be soon. Not long after, Glasslands, DBA, and 295 Kent all indeed closed and the Men haven’t performed at this level since. Listening to the song now, it easily brings back the times of standing on Kent alongside stark warehouses and yellowed lights and the first New York scene I was a part of that felt real and meaningful.

A great song can be marked in many ways, but years after its release, Deafheaven’s “Dream House” still evokes a sense of urgency and newness, something unique and full of the utmost pleasures. The guitars burst like illustrious light beams shining through the most ominous clouds and the rhythms crash like tremendous thunder. It’s a heavy song that conveys eternal beauty through seething subliminal elements combining metal blast beats and shoegaze tones to create a euphoric sense of pristine quality. It’s a song of power that can also break down into moments of bliss and serenity, tackling so many emotions in nearly ten minutes. It uplifts in the darkest of times and still resonates supremely for celebrations of joy and breakthrough. It’s a song that never relinquishes power and provides comfort along every step of the journey.

The term pop music doesn’t hold the same water these days like the glorified pop of the 60s and 70s. These days, there are EDM bangers, emo mall tracks, and rap megalomaniacs that top the charts. FKA twigs hasn’t had a #1 song, but “Two Weeks” sure feels like a major achievement. It breaks the mold of the typical pop song, adds in hints of Aaliyah’s timeless R&B, Arca’s out of this world production and almost eviscerates itself before reaching its climax. Twigs is brushing off her fame and intern taking the moves and cues that come to her, never giving in to conventional means, but rather always pushing the boundary forward. It’s an experimental track that still feels a bit safe for her and allows the listener to enter her own world of magic. She is transfixing and elegant in her own realm as well as the real world. Watching her grow from her mysterious web presence into a star in the making has been a real treasure and possibly unlike anything we’ll see again soon.


On paper, it sounds like a dream, but epic collaborations don’t always turn out so perfect. It could’ve been a recipe for disaster, but adding the world’s biggest ego and a fuckin’ Beatle to a Rihanna song was one of the most brilliant and underrated pop songs of the past decade. A simple guitar strum that was a heavy nod to “Yesterday”, one of Riri’s best vocal performances to date, and a relatively subdued Mr West culminated in a minimal pop number that didn’t have enough of a hook to rally people to the dance floor, but still got everyone on their feet to belt along to the chorus. The Gap inspired video wasn’t a showstopper either and still it’s difficult to pinpoint a single flaw in the song. On yeah, Wilson Phillips also provided some back-up vocals. There are few people on this planet that can crank out hit after hit and fewer who can muster up some magic fifty years into their career. “FourFiveSeconds” proves that it is possible to capture lightning in a bottle and spin it into pure gold.
Posted by marc at 11:29 PM