An All Hallow's Eve Mixtape 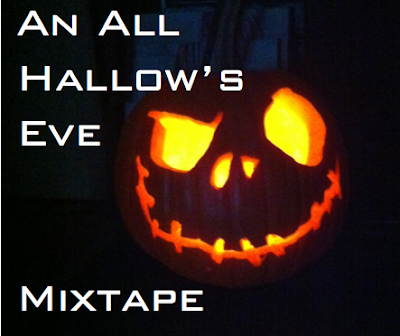 Whether you partied too hard last night or you're keeping the spirits alive today, this playlist should help you through your day. Happy Halloween kids!

*thank you to the lovely Katelyn Bischoff for the photo
Posted by marc at 12:04 PM No comments:

Email ThisBlogThis!Share to TwitterShare to FacebookShare to Pinterest
Labels: mixtape

With Death by Audio filled to capacity, Japandroids took to the stage backed by a mountain of amps. In some ways this may have been the quintessential Japandroids show. The 250 person venue was packed like a sweatbox as clouds of cigarette smoke and beer sprayed through the air. These guys played loud rough noise rock and pummeled the crowd with waves of sound. Unlike the show they played at the Mercury Lounge over a year ago, this show caught the duo on the end of about a two year run supporting their debut full length album. In the final stretch, the dudes left nothing to chance. The crowd erupted for the 1-2 punch of "Wet Hair" and the live debut of recent 7-inch single "Younger Us" (both songs containing perhaps my favorite lyrics from the past two years: "we run the gauntlet/must get to France so we can french kiss some french girls" and "remember that time you were already in bed/said fuck it came out to drink with me instead" respectively) and it seemed as if there was no looking back. The pulverizing drumming of David Prowse was matched by the screaming guitar of Brian King as they reminded the crowd not to hold anything back after each song. Their sound was massive and the crowd was fearless. At one point someone shouted "can it get any louder?" and Prowse simply answered "never."
Posted by marc at 1:05 AM No comments:

Having not seen Dirty Projectors since the release of their epic album Bitte Orca, I was excited for their opening slot before Phoenix. The band sounded great and the angular guitar work and disjointed vocals translated well to their larger than normal venue size. The fluttering instrumentation which made me apprehensive the first time around, transcended all expectations I had for the evening.

While Dirty Projectors played an all too brief set, the night seriously belonged to Phoenix... at first. Pitchfork claims it was the best Phoenix show ever. Their sugary-sweet synth-pop jams exploded from the speakers. They were amazingly tight and played a near perfect set list. From the opening of "Lisztomania" the frenchmen dazzled their way through a stunning light show and packed in hit after hit. However just when it seemed as if the night couldn't get better DAFT PUNK took the stage. I personally was in a stage of euphoria. After three years of silence, the electro legends made a mind-blowing come back by gracing the stage with Phoenix and ripping through "Harder, Better, Faster, Stronger/Around the World" and a live remix of the best version of "1901" that will ever be heard. As they all jammed together the crowd went into an utter frenzy. It was a stunning end to a fantastic (and what will become legendary) show for a band that has reached a whole new level. This will be hard to top.

Tilt-shift video of the 2010 Coachella Festival in Indio California.
Posted by marc at 12:59 AM No comments:

Email ThisBlogThis!Share to TwitterShare to FacebookShare to Pinterest
Labels: Coachella, video
Newer Posts Older Posts Home
Subscribe to: Posts (Atom)
Stream of conscience blogging covering my thoughts on indie rock, electronic, punk, noise, and pop. I live in Brooklyn, like to make lists, and am trying to listen to more hip-hop.
Thanks for reading!