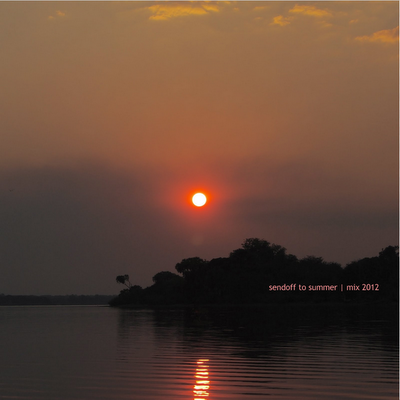 I skipped out on a mid-Summer mix, so to make up for it, I'm helping curate your last long weekend of the summer. Here are some jams (old and new) to enjoy while you give the Summer a final sendoff. So, whether your catching some last rays at the beach, chilling on a rooftop, or melting on the concrete, blast these tunes and look back on Summer 2012.

Email ThisBlogThis!Share to TwitterShare to FacebookShare to Pinterest
Labels: mixtape


Last Friday, three of the members of Pussy Riot were convicted of "hooliganism motivated by religious hatred and sentenced to two years in prison. In turn, the remaining members (who are still being hunted by the Russian police) released their newest single. The Guardian paired the song with a video montage which you can view above and below, you can read the translated lyrics.

This state may be stronger than time in jail.

The more arrests, the happier it is.
Every arrest is carried out with love for the sexist

Who botoxed his cheeks and pumped his chest and abs.

But you can't nail us in the coffin.
Throw off the yoke former KGB!

Putin is lighting the fires of revolution
He's bored and scared of sharing silence with the people
With every execution: the stench of rotten ash
With every long sentence: a wet dream

Arrest the whole city for May 6th
Seven years isn't enough, give us 18!
Forbid us to scream, walk and curse!
Go and marry Father Lukashenko

Cursive and Titus Andronicus played the House of Vans

The Vans House Parties don't exactly provide the most intimate or acoustic friendly setting, but that didn't stop people from showing up to another free concert (complete with an open bar!) along the Williamsburg / Greenpoint border. After sets from Joyce Manor and Love as Laughter, an onslaught of people flooded the venue for New Jersey punks Titus Andronicus. Their adrenaline fueled set consisted of excellent new material from their recently announced third album Local Business as well as highlights from their great debut and killer sophomore record, The Monitor. Raspy shouts from front man Pat Stickles pumped up the crowd for some intense outbursts complete with flying fists and grand sing-a-longs. However, it was their epic finale that really took things to the next level. The medley of "A More Perfect Union" and "Titus Andronicus Forever" was the peak of their performance and extended solos were more than welcome from screaming fans and proved that the night really was theirs for the taking. Despite occupying the headlining slot, the crowd was significantly smaller before Saddle Creek veterans Cursive took to the stage. While Titus Andronicus proved that they are an important band in 'the now', the remainder of the evening was much of a nostalgia trip that accented the golden days of Emo long before it acquired the derogatory connotation. As the 90s came to a close, Cursive were a part of the final frontier along with the Get-Up Kids, Jimmy Eat World, and Saves the Day (among many others). Long before the days of Fall Out Boy and Good Charlotte, Cursive blended slicing guitar riffs, obnoxious yells (Pitchfork described Tim Kasher's voice as "the worst great voice in indie rock"), and hardcore rhythms and produced overlooked records that meant a lot to a certain group of people. While their recent work has fallen short in comparison, the men still stick to their guns. After playing deep cuts from their classics Domestica and The Ugly Organ, Tim kicked off the encore saying "Thank you for letting us be old rockers" and then directly plunging into "Sierra". The crowd may have dwindled as the night came to a close, but those who stuck around didn't waste an ounce of energy and the intensity never let up. They may be met with rolled eyes, but for those who grew up with them, they will always be a band that lost their genre to the malls.
Posted by marc at 10:48 AM No comments:

When I first heard The xx back in 2009, I knew I was listening to something special but I never would have guessed that they would achieve their current level of success. Their hugely anticipated sophomore record, Coexist, will be released on September 11 and today the band shared the second single "Chained", a great next step forward that channels beats from Burial while still keeping true to their stark sound as made evident with that slashing guitar riff that echoes their great debut.

Email ThisBlogThis!Share to TwitterShare to FacebookShare to Pinterest
Labels: song, The xx

You've already heard "Sleeping Ute", the excellent first track from the forthcoming Grizzly Bear record Shields, and today the band premiered another beautiful track, "Yet Again", on BBC Radio 1's Zane Lowe Show. Enjoy the track below as you wait for Shields to drop on September 18.

Email ThisBlogThis!Share to TwitterShare to FacebookShare to Pinterest
Labels: Grizzly Bear, song
Newer Posts Older Posts Home
Subscribe to: Posts (Atom)
Stream of conscience blogging covering my thoughts on indie rock, electronic, punk, noise, and pop. I live in Brooklyn, like to make lists, and am trying to listen to more hip-hop.
Thanks for reading!