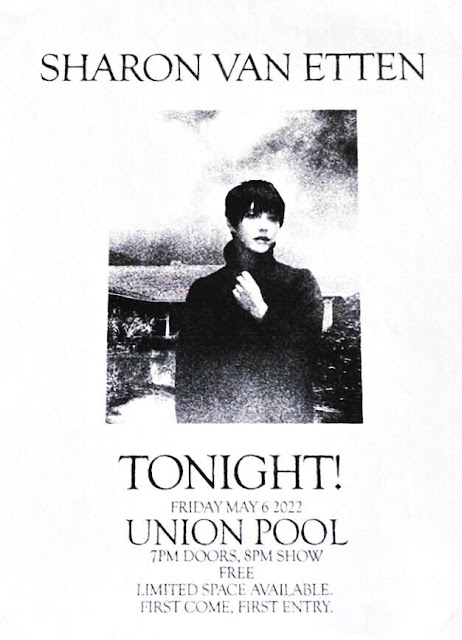 On Friday, Sharon Van Etten released her new album, We've Been Going About This All Wrong, and played Brooklyn's Union Pool to celebrate.
With no singles from the album dropping in advance, the release of Sharon Van Etten's new record felt like one of the few shared experiences this year where the collective population heard a record all at once. As a surprise for the special day, Van Etten announced a very intimate, free show at Williamsburg's Union Pool with tickets going on a first come first serve basis for those who could get to the venue as quickly as possible with ID and proof of vaccination. A few hours later, Sharon took to the stage to live stream some new songs in addition to her now classics. Seeing the star so up close and personal was a real treat and it was clear that the show was important to her as well as she had some visible nerves as she took the stage, although her delivery of each track erased those noticeable moments in a flash, her command of the room an immediate indication of her showmanship and stage power. Starting off only on vocals, she warmed up the crowd and found her footing as a standalone singer, working the audience and staring deep into the eyes of those in the front row. "Comeback Kid" still hit with a punch and was the track that locked the night into high gear and reach a momentum that would continue for the remainder of the night. "I still play guitar" she told us, however, not too long into the set, and she proved that not only is that true, but she still lets it rip too. Her acoustic strums are a wonderful compliment to the range in her voice, but see her really unleash on an electric guitar is a sight to behold. "Come Back" was a new highlight that swelled with raging emotions, a real peak of the night, and saw her shed any sense of a shield to lay her self out in total vulnerability. She brought the main set to a close with the absolutely killer run of material starting off with her new track "Mistakes," which just got a video that features her walking around Williamsburg visiting local bars before ending up at this very venue and is one she claims is for finding your shyness and owning it, before closing things down with "Hands" and "Seventeen." The new one felt alive and full of passion, much like the rest of her catalogue, but really hit hard live. She encouraged everyone to dance for it and she did a great job cutting loose on stage as well. "Hands" was another smash that felt larger than life as she tore into it with next level feelings and unreal authority. Of course "Seventeen" was the track of the night and without question the moment in which she transformed to a superstar. Prowling the stage, she lunged with force and when she found a fan in the crowd she locked her gaze and proceeded to create the most surreal and magical moment for one lucky person while the rest of us looked on in pure amazement. Sharon reached deep within to pour her heart into the moment as she decried "I know what you're gonna be!" before she placed her hand on the fan in a transfer of energy-like scene, imparting her wisdom and charm through this direct connection. She'll be just like her, indeed. It was a song of triumph that catapulted the night from a great show to a top tier highlight, a career-defining moment. On her sixth record, Van Etten has affirmed her place as a rock-solid songwriter, gifted singer, and a performer ready to cast a spell over a crowd. She's earned her status and isn't letting go, her grip tightly on the reigns of leading figures in indie rock.
Set list:
01 "I’ll Try"
02 "Headspace"
03 "Comeback Kid"
04 "No One’s Easy to Love"
05 "Anything"
06 "Come Back"
07 "Mistakes"
08 "Hands"
09 "Seventeen"
--
10 "Far Away"
The show was live-streamed and you can catch the archive footage above (for now). I'm up front in the red hat.
Posted by marc at 10:16 AM