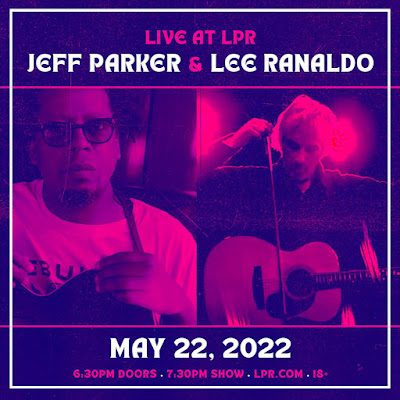 Two stellar performers and indie rock legends, Jeff Parker and Lee Ranaldo pulled double headlining duties Sunday night at (le) Poisson Rouge.
Billed as a "textbook definition of a 'your favorite musicians favorite musicians' kinda night," the double header of Sonic Youth's Lee Ranaldo and Tortoise's Jeff Parker was an esteemed treat for devoted fans of their spiritual blend of experimental, jazz, and post-rock.
Lee Ranaldo opened with an acoustic set and played his recent EP, In Virus Times, in full to start things off. His thunderous strumming and knocks of percussion echoed through the silent room, his transfixed gaze a sign of his passion and enthusiasm for his time back on stage. "This was the only music I wrote during the pandemic" he announced after he finished the piece and then introduced his next track as the one he felt he'd best be able to do from his collaboration Raül Refree. He played "Forty Songs" from the newly announced For the Birds: The Birdsong Project and ended with a cover of The Velvet Underground's "Ocean." "This one is for Bob Dylan's 81st birthday on Tuesday" he said after remarking how much he enjoyed playing it as of late and pondered on whether Dylan and Reed ever crossed paths. A member of one of America's greatest bands, but also a unique and important figure of no wave, free-jazz, and experimental rock in his own right, Ranaldo's ever profound music is as important in the cannon of American rock as his former band's and seeing him alone in the spotlight is a real pleasure.
Jeff Parker changed things up and plugged in for the second set of the night, lighting up the crowd with brilliantly layered guitar riffs that swirled together for dazzling moments of all out bliss. Opening with "Four Folks" from last year's excellent Forfolks and then "My Ideal," he set the tone for his immersive combo of spiraling jazz guitar with droning ambient clouds of sound that rang out across the room. Finger picking and fret tapping dizzying sequences and overlapping them to build deep webs of tangled licks, his live construction of songs is brilliant to behold. He then went on to cover an impressive run of Frank Ocean's "Super Rich Kids" into Thelonious Monk's "Crepuscule with Nellie" and "Ugly Beauty" to really enhance the night. Looping his striking notes into marvelous patterns, his arrangements and navigation on stage were inspiring and his humble remarks between songs kept the spirits high throughout the show. His stunning individualism came through with shining colors and made for an intimate set full of delicate riches. The crowd was enamored and gave massive cheers during the breaks between songs, the affection clearly getting through to Parker who channelled it into invigorating set.
The acoustic and electric dynamic was a wonderful staging and the range in music from these two inspiring guitarists was extraordinary. Each expressing their lone vulnerability in such distinct fashions helped to make the night feel special and one that lived up to the tease. Two iconic musicians playing distinct, yet complimentary sets to display their contributions to some of the most important songs in the underground.
Lee Ranaldo set list:
01 "In Virus Times, Pt. 1"
02 "In Virus Times, Pt. 2"
03 "In Virus Times, Pt. 3"
04 "In Virus Times, Pt. 4"
05 "At The Forks"
06 "Last Looks"
07 "Forty Songs"
08 "Ocean" [The Velvet Underground cover]
Jeff Parker set list:
01 "Four Folks"
02 "My Ideal"
03 "Mains" [Chad Taylor cover]
04 "Super Rich Kids" [Frank Ocean cover]
05 "Crepuscule With Nellie" [Thelonious Monk cover]
06 "Ugly Beauty" [Thelonious Monk cover]
07 "La Jetée"
Posted by marc at 9:09 AM