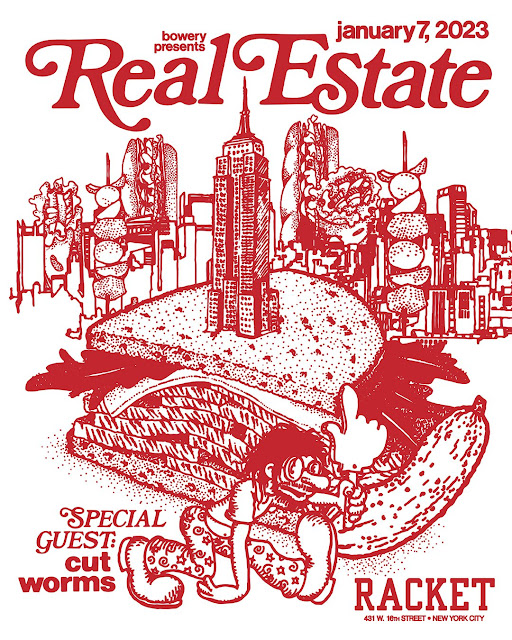 Real Estate played opening night of Manhattan's newest venue, Racket NYC.
Bringing their expertly chill vibes and a fresh batch of new tunes, Real Estate kicked off 2023 by christening the city's newest venue while confirming their status as one of indie's most consistent and pleasurable rock bands. Breezy guitar, rumbling bass lines, steady percussion, and overlays of refined synth all coalesced to form the band's particular sound of easy going rock music that feels equally refreshing as much as it recalls nostalgia from a now aged Brooklyn scene. Capturing the essence of Williamsburg in the late aughts and early 2010's, Real Estate's sound has long been comprised of bassist Alex Bleecker's love of jam bands a la the Grateful Dead and Phish along with lead singer and primary songwriter Martin Courtney's admiration for the incendiary dream-pop of Yo La Tengo and the glamour of The Strokes making for some of most reliable string of albums of any band of their era and showcased that they can still get a packed crowd to feel revived by their blissful charisma and lackadaisical styles. On stage, the band gave off effortless charm, their easy playing and non-forceful showmanship proving simple, yet rewarding pleasures that made for an exciting, yet rather calm evening. "Had to Hear" and "Primitive" brought lively pop elements with flushed out guitars and thudding bass while "Green Aisles" leaned hard into the nostalgia and knocked it out of the park. Some tracks were given drawn-out endings, the influence of jam bands as well as tremelo'd guitar both taking the spotlight and meeting to create moments that make the group's live show stand out from their records in a fun and exciting way. "It's Real" always proves to be the highlight, however, and it was clear that it was most beloved song of the night as the crowd emphatically recalled the "whoa oh oh oh oh oh oh" back to Courtney with enduring love, the mutual appreciation beaming from everyone one stage. "We're from New Jersey, but New York always feels like the hometown show" the band remarked to much applause, but it did highlight the communal feel of the evening. Several songs made their live debut during the set as well and each one dropped nicely into place, the presence of synths becoming more prominent as well as the combo of electric and acoustic guitars which nicely fleshed out the sound adding rich textures to their already luxurious sonic palette. It's been fun to watch the band progress over the past decade plus and their next round of tunes sounds just as promising as what has come before, adding another notch to their belt and continuing their streak of delightful guitar-pop.
Set list:
01 "Anything Could Happen" (cover)
02 "Saturday"
03 "Primitive"
04 "Talking Backwards"
05 "Freeze Brain" (new song)
06 "Green Aisles"
07 "You"
08 "Municipality"
09 "Water Underground" (new song)
10 "Paper Cup"
11 "It's Real"
12 "Flowers" (new song)
13 "Darling"
14 "White Light"
15 "Interior" (new song)
16 "All the Same"
--
17 "Friday"
18 "Had to Hear"
Posted by marc at 12:17 AM

Great show and review - I agree completely with how well the band’s sound still works to create a fresh vibe with also still creating that feeling of nostalgia! Only thing I wanted to make mention of beyond that is that the band didn’t play easy, last night - though I wish haha… great song <3