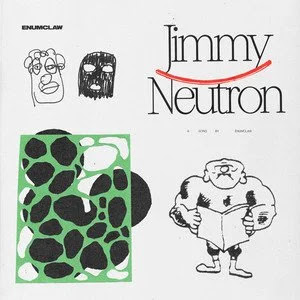 Enumclaw have announced their debut full-length album, Save the Baby, and shared a new single, "Jimmy Neutron."
The Pacific Northwest quartet Enumclaw have returned with their second song of 2022 which now happens to be the second single off their upcoming debut album due out this fall. With scuzzy guitars and steady rhythms, this track continues their indie-nostalgia vibes that have permeated the region for decades. It's a carefree track that's an ode to young love that finds the band second-guessing themselves. Over fuzzy chords and a sharp snare, the band prove that their knack for writing these homespun tunes isn't drying up any time soon and their skills are only sharpening over time. "I want to fall in love" they sing, but the panic starts up not long after. Describing "Jimmy Neutron" in a press release, frontman Aramis Johnson says:

This song is about getting so close to love that you can almost taste it. All the highs of being in love and how ridiculously unlike yourself it can make you act. All the day dreaming you do about what things could be and how they might go. There's always a catch, though, and in this story, as soon as you reach out to grab "love" and have it in your hands, you drop it.

If there's one thing we can tell right now it's that their panic needs to fade. This is a crisp song that hits right in the gut and sounds as mature and confident as any loving relationship should, leaving nothing to doubt. These guys are the real deal and it's exciting to see them fall in love. Hopefully the confidence will stick.
Save the Baby is out October 14 via Luminelle.
Posted by marc at 4:33 AM

Email ThisBlogThis!Share to TwitterShare to FacebookShare to Pinterest
Labels: Enumclaw