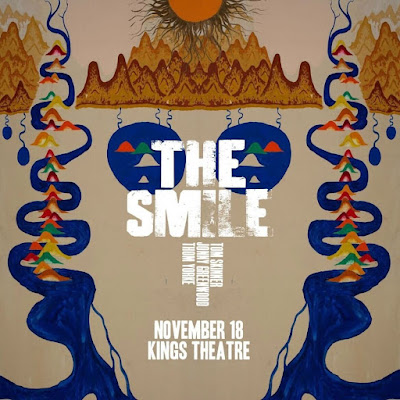 One of the year's most exciting new bands, The Smile, cruised into Brooklyn's Kings Theatre for their first of three NYC shows and transcended all expectations.
"We're called the Smile and we've put out one album and now we're here" uttered Thom Yorke roughly halfway through the set of his new band with fellow Radiohead member Jonny Greenwood and drummer Tom Skinner of Sons of Kemet. The only shame in that is typically, new bands start out a bit smaller and play much more intimate venues on their first tour, but not every new band is the Smile. When two-thirds of the group belong to one of the most beloved indie bands of the past thirty years, they have a bit of a heads start. Kings Theatre, however, is smaller than the arenas their main act plays and the pristine venue made for an absolutely surreal setting for the otherworldly performance that took place. Anchored by Tom Skinner's mesmerizing drum beats, Thom and Jonny spent the night shuffling back and forth, trading bass and guitar parts, pianos, and more, their fluidity on stage a sight in and of itself, but of course it was the sounds that felt transformative and somehow more powerful as they were brought to life than they do on record. Yorke's voice has always been a hallmark and one of the most powerful consistent features in his music and The Smile finds him once again flexing his pipes with incredible dexterity and grace, his angelic croon both serving as eerie and, yet elegant tones that were delivered with crystalline precision. Leading into the night with the solo piano riff of "Pana-Vision," the group eased into their quiet power as the marching beat slowly gathered steam with increased rhythm slowing diving into their strengths without giving everything away in the opening moments. The plunking guitar of "Thin Thing" swiftly picked up the energy as the band locked-in for the second night and instantly insured that not only were the trio primed and ready to bring these tracks to life, but do so with such astounding success was not something entirely expected. Thom and Jonny have been at the top of their game for decades and at no point during the show did they give any hints that they've reached the end of their unbelievable artistic streak. "Speech Bubbles" is a meditative jam on record, the loose jazz rhythm allowing the guitar to float with ease and Skinner's live rendition allowed his bandmates the creative room to enhance the track and lean in to their dreamier moments of breezy grooves. On perhaps the closest moment Thom has come to reviving the '90s-esque acoustic anthem, "Free in the Knowledge" rang across the theatre to total silence, the crowd transfixed on the delicate strums before the other kicked in to drive home the moment, at the end of which Greenwood began to bow his bass as he led the trio through a wave of noise in a mix of shoegaze style feedback and free jazz inspired improvisation. Despite bucking the connotation of being a "rock band," there were moments that did bring about some of the more heavy moments I've seen from any of these members and their various other projects, Jonny thrashing away with extraneous force and overblown hair tosses. "We Don't Know What Tomorrow Brings" upped the scales and rocked with purpose, the guitar riff cutting like lasers as forceful drums ignited the groove. Once again reiterating that they only had the one album, the band mixed five unreleased tracks into their set, all fitting perfectly while still adding new elements and covering more sonic ground. "This one might crash, who knows?" Thom stated before the new song "People on Balconies," "we just reworked it today." (Spoiler: it didn't.) The guitar-free track saw Yorke on bass, Greenwood on piano, and Robert Stillman on saxophone which gave it strong jazz undertones that we haven't heard from these song writers in quite some time. The band closed the main set with the album's lead single, "You Will Never Work in Television Again." An absurdly great rock song and one unlike I ever imagined I'd hear from these guys again, it carried post-punk snarl and an electric groove making it without question the most rocking part of the night, an emotional high and freeing feeling of all out euphoria. Yorke addressed the crowd during the encore to explain how the origins of "The Same" came about during the moments of 2020 "when people took to the streets to demand change, for Black Lives Matter, for women's rights, for better and safer lives for everyone," an encouraging and hopeful moment that gave new insights to the glowing electronic tune. "Bending Hectic" came next and was the strongest of the new tunes for the evening, slowly building over a steady groove before combusting into towering wails of guitar, the unleashed power of Jonny Greenwood demonstrating what it means to shred. Taking to the stage one last time, the band rocked through Thom's solo track "Feeling Pulled Apart by Horses," once again locking into a heavy groove that was doused in delayed vocals making for one final moment of awe-inspiring bliss. It should be no surprise that these veterans not only put on high caliber spectacle, but that they could turn one of the year's best album into one of the year's best shows.
Set list:
01 "Pana-Vision"
02 "Thin Thing"
03 "The Opposite"
04 "Speech Bubbles"
05 "Free in the Knowledge"
06 "A Hairdryer"
07 "Waving a White Flag"
08 "Colours Fly"
09 "We Don't Know What Tomorrow Brings"
10 "Read the Room"
11 "Skrting on the Surface"
12 "Just Eyes and Mouth"
13 "People on Balconies"
14 "The Smoke"
15 "You Will Never Work in Television Again"
--
16 "Open the Floodgates"
17 "The Same"
18 "Bending Hectic"
--
19 "Feeling Pulled Apart by Horses"

Email ThisBlogThis!Share to TwitterShare to FacebookShare to Pinterest
Labels: The Smile