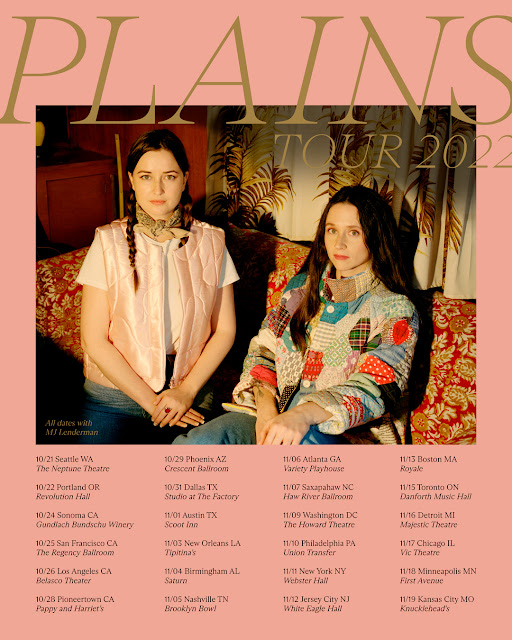 The fantastic double-billing of Plains, the duo of Waxahatchee and Jess Williamson, and MJ Lenderman made for an electric Friday night at Webster Hall.
Fresh off the release of this year's excellent record Boat Songs, MJ Lenderman made an impressive showing as the opening act for Plains offering up deep-fried alt-country that was saturated with heavy guitar, thick licks, and classic Americana rhythms. The steely tones echoed throughout the room and lended themselves heavily to the band's jammy tendencies making metallic chords reverberate with passion and tenacity. The revved up tunes exploded with sound and the subtle twangs made for brilliant moments of embellishments that shone with distinct purpose. The heaviness of the guitar resonated on each song while the steady beat anchored the walls of sound allowing the steel guitar to flourish at the exact right moments. Extended and interlocked jams kept the flow of songs at a constant and gave the band plenty of space to add new flourishes and extended solos. "TLC Cagematch" dragged with post-rock fashion as the band stretched things out for maximum purpose before coming back around to crash into form. "Tastes Just Like It Cost" closed out their set in epic form, the band firing on all cylinders and giving a headliner worthy finish to their set. Taking the more aggressive styles of Neil Young's Ditch Era and taking a Touch & Go approach makes for something truly exciting and the band brought it to life with wondrous precision. The record is clearly one of the best guitar albums of the year (another belongs to the headliners) and the live show only reinforced the band's spot as one of the brightest acts to emerge this year. Packed with with, full sounds, it was an impressive start to the night that somehow managed to get even better.
Plains took to the stage and immediately went into the opening track off their new record, hitting the crowd with the upbeat twang of their golden country tones. The energy from Jess and Katie was beaming, their excitement and joy ever-present as they traded scrumptious harmonies with absolute elation. Without missing a beat, they went for track two (a daring move to play your lead single second in the set!) and the room erupted with cheer. "Problem With It" was forceful and authoritative, a stunning number in every regard and one that shook the room with purpose as it took things to an immediate 11 so early in the night. A definitive song sang with certainty and affirmation. The guitar solo kicked up the dirt and got the crowd moving with its rushing rhythm. "Line of Sight," track three followed and really put the night in motion, the sepia riffs becoming more strident with each passing moment as the dynamic vocals continud to soar. Jess Williamson took the first solo number of the night, although Katie backed her on vocals (a favor Jess would obviously return), and continued to exhume her remarkable charm with absolute grace, her style all her own and as commanding as anyone. Of course when Crutchfield launched into "Can't Do Much," the crowd reached a new level, a sign that the night somehow kept growing with excitement and joy. The partnership between the two was a real pleasure to witness as they each allowed one another the spotlight, adding their own touches when appropriate, but never outdoing the other. "Abilene" was another magical moment of real serenity, their vocals once again transcending all expectations and when they got to "Texas in the rear view / Plains in my heart," they rightfully gave it an elongated pause to let the crowd applaud in excess and the grins on the singers went from ear to ear. On this night in particular, Kate Crutchfield sounded out of this world, her vocals towering with utter perfection. She was in pristine form on this occasion, each song somehow surpassing all the ones before it and somehow sounding more impressive than on record. "We're gonna do a cover," Katie announced as they slid into Waylon Jenning's eternal classic "Mamas Don't Let Your Babies Grow Up to Be Cowboys," a crowd melting moment that sparkled with emotions and blazing nostalgia. Every song felt like a sing a long moment, but this one really let the crowd soak up the memories as they shouted along to the chorus. The album's title track was yet another shimmering number that billowed with elegance and once again highlighted their mesmerizing harmonies. "Hurricane" closed out their main set and sounded like a bonafide classic. For this one, Crutchfield took the mic and took herself to the edge of the stage, making for a powerful moment as she stood toe to toe with the crowd and asserted herself as one of the best country artists of the past few years. This may have been a joint record and show, but this was a moment she owned all her own. MJ Lendermen joined for the encore as they carried the crowd through Robert Earl Keen's "Amarillo Highway," his dominating guitar once again taking a moment to decimate the crowd. "If you know the words to this one, sing along" Williamson instructed the crowd for the final number of the nigh, a rousing cover of The Chicks anthem "Goodbye Earl." A true legacy moment, Plains felt unstoppable and captivated the crowd without hesitation, confirming their status as ascending stars and yet another wonderful partnership in country music that seems to know no bounds.
Set list:
01 "Summer Sun"
02 "Problem With It"
03 "Line of Sight"
04 "Wind on Tin
05" Can't Do Much"
06 "Bellafatima"
07 "Last 2 on Earth"
08 "Abilene"
09 "Lilacs"
10 "Easy"
11 "Mamas Don't Let Your Babies Grow Up to Be Cowboys" [Waylon Jennings]
12 "Hunter"
13 "No Record of Wrongs"
14 "I Walked With You a Ways"
15 "Hurricane"
--
16 "Amarillo Highway" [Robert Earl Keen cover]
17 "Goodbye Earl" [The Chicks cover]
Posted by marc at 9:08 AM