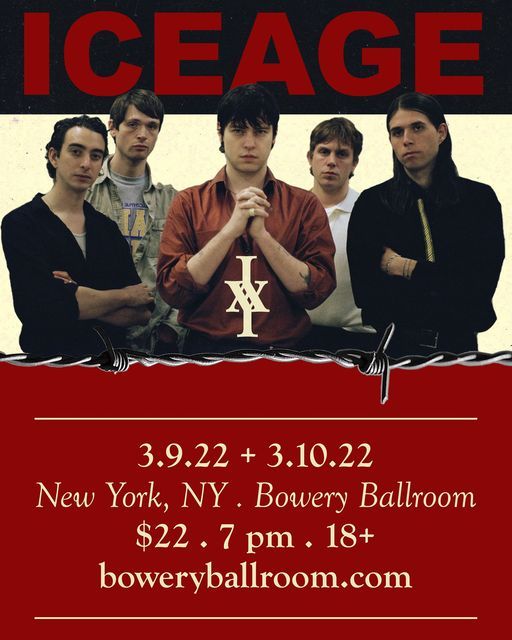 Iceage are finally on tour in support of last year's excellent Seek Shelter and stopped by Bowery Ballroom for their first of two nights in the city.
It felt rather fitting that the day Iceage rolled into town also happened to be a day the city spent hiding from a sudden snow storm only days after a tease of spring and 75 degree temperatures. Nevertheless, the band wasted no time ripping into their relentless set of ragged punk that made the night come alive. Opening with "Dear Saint Cecillia" was a bold, stong choice that I thought would be a high point of the night, the tracks steady build and triumphant "wooo" seemed like moments that could be hard to top, but this was in many ways only just the beginning. Never breaking long enough to kill any momentum, the band unleashed a remarkable set of their killer cowpunk anthems that slowly got the crowd more and more energized until nearly the entire room felt like they were jumping into the pit. Frontman Elias Bender Rønnenfelt continues to lead the band with an unprecedented swagger, his clear control of the crowd and each track a truly mesmerizing thing to watch as he knows exactly when to stoke an audience or pull right back into a song just when it seems like he's missed a mark. It's a talent he's had from the band's beginning and seeing them evolve over the past decade has been a sight to behold. The band exists in two distinct phases, with their first two albums representing their thrashing hardcore and lightning fast sets and their more recent progression to hardcore honky tonk. There is still that visceral energy and snarl, but they've clearly expanded on their sound. This set consisted of nearly entirely material form their second stage as a band, but their fine tuning of the set made the show flow with radically satisfying results. "The Lord's Favourite" did seem to be the peak of the night with the crowd really giving the energy back to the band and both sides of the stage relishing in the moment of connecting over the music. The room felt ecstatic the entire night with not a single low point stalling the rhythm of the show. Each song felt perfectly placed, the vibes well balanced between revved up, lashing guitar riffs, and swirling melodies that almost struck a Brit-Pop chord. I believe it's also the only time I can remember a string section on stage and the crowd still forming a pit. From their forceful post-punk start, they've always felt like a band that was ready to take their sound even further. After I saw them back in 2011 I wrote, "people knew something big had just occurred and something even bigger could be on the horizon" and that proved to be true. Loosening up their riffs and giving it more of a western twang has resulted in the band owning the stage like they're playing to a sprawling festival crowd every night. After their resounding set, the band came back for an encore and ended the night with "White Rune" from their lethal debut record. If the night had felt like it was a pressure cooker before, it finally exploded with that one and sent the crowd off with a triumphant finish.
Set list:
01 "Dear Saint Cecilia"
02 "Pain Killer"
03 "High & Hurt"
04 "Vendetta"
05 "Shelter Song"
06 "Beyondless"
07 "The Lord's Favorite"
08 "Thieves Like Us"
09 "Hurrah"
10 "The Holding Hand"
11 "Forever"
12 "Drink Rain"
13 "Catch It"
--
14 "Abundant Living"
15 "White Rune"
Posted by marc at 8:40 AM