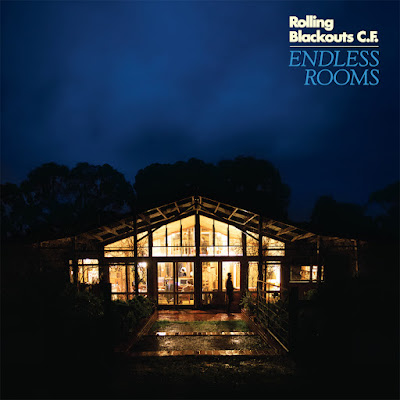 Rolling Blackouts Coastal Fever are set to release their new album, Endless Rooms, in May and today they've shared the record's second single, "Tidal River."
Rolling Blackouts Coastal Fever make very compelling, straight-forward indie rock that sounds both complex and accessible. They're not as loose-knit as the Strokes or as permanently chilled out as Real Estate, but it'd be easy to throw them into the mix as superb guitar-rock with big riffs and catchy choruses. "Tidal River" isn't as frantic and jolting as some of their past singles, but it still carries the high-speed energy we've come to expect from the Aussie quintet. Grooves are locked in with a firm grip and airtight solos that are held together by a steadfast rhythm section remain intact, but this one has more of a dead-pan vocal delivery. It's a nice change up to their standard sound that has come with past singles and one that upholds the vibrance they've been able to capture throughout their career. From the band's Tom Russo:
“Tidal River” is a little snapshot of living in a place at a time when it feels like there is no one at the wheel. If there were a complacency Olympics, Australia would win gold by a mile. In the “lucky country,” the luckiest ones jealously guard their fortune, as if it will disappear if they share it around. There is so much potential to do better, but it sometimes seems like progress is two steps forward, two steps back. Tidal River is located in what Europeans named Wilsons Promontory, where the river meets the ocean. It has great significance for the Gunai/Kurnai and Boonwurrung peoples, who call it Yiruk and Wamoon respectively. No matter the struggles and politics that go on, the river keeps churning into the sea.
Much like the river itself, the band keeps churning out high-quality songs and "Tidal River" is another buzzing jam in the band's growing arsenal of rock-solid tunes.