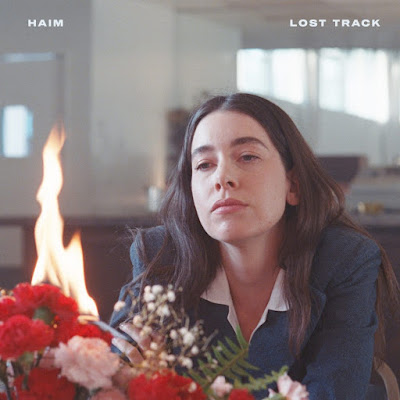 The sisters HAIM are back with a one-off single to stoke the excitement ahead of their extensive tour schedule.
HAIM can create huge, swelling songs that seem ripe for open fields of a festival or big arenas that they'll finally headline in the coming months. They write anthems that beg for sing-a-longs and massive audience participation to really heighten their already bursting enthusiasm. "Lost Track," their latest single, isn't one of those songs. Instead, it recalls the acoustic simplicity of Fiona Apple's album The Idler Wheel... drawing in the listener for something much more intimate than their wild guitar solos. There is a lot of surface noise on the song which gives it some unique texture that feels much more inline with their indie roots and less so their mega-pop stardom. Using handclaps as a drum beat, it sparkles with a radiant glow, however, as twinkling keys and faded thumps back the rough acoustics right before their eternal harmonies hit for the chorus. Yesterday, the band posted the following comment when announcing the track:

“I’ll never get back what I lost track of”

We had that line written for the last year but could never figure out what to do with it. We kept writing it down, not knowing where it should live. Cut to PTA shooting the director’s cut issue for @wmag with our baby sister on the cover! An opportunity arose to do a quick music component while shooting the story. Paul mentioned having the book “Appointment in Samarra” as a possible direction. So we did some digging around the book and were inspired by the scene where the main character throws a drink in someone’s face at a country club. We were inspired by the idea of someone doing something so drastic to get out of a situation they felt uncomfortable in – just to feel something. We finally remembered that lyric and wrote and recorded the song and shot the whole thing in a few days! Anyway, felt fun to do something very collaborative/ off the cuff.

Off the cuff is right and it's exciting to hear a different side from the sisters, one that really shows off their skills in a new light. You can easily picture this song in the middle of a set as a brief comedown moment before launching back into the high caliber theatrics we might be expecting.
"Lost Track" is out now!
Posted by marc at 6:19 PM