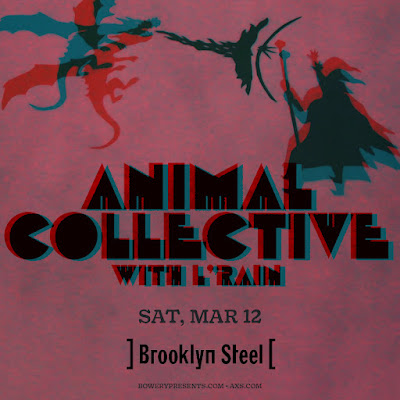 In February, Animal Collective released Time Skiffs, their best album in over a decade. On Saturday night they brought it to Brooklyn Steel.
These days, it feels like it's been a lifetime since Animal Collective dominated the indie scene and rose to the tops of festival posters around the world. From their commercial peak that was ushered in by their 2009 magnum opus Merriweather Post Pavilion to now, they've floated along in a bit of a creative flux and while their output never ceased to be prolific, they failed to connect and resonate like they did at the end of the aughts. With the release of their new album, however, the band have reignited an old flame and their resurgence has rekindled the romance with their oldest fans. Their new record is a bit looser than we've heard them sound in a while and their floating rhythms recall more of their freak-folk days and less so the dense, abstract electronic puzzles that clogged up a record like Centipede Hz. However, all of that being said, you still never really know what you'll get when the band hits the stage and takes you on their odyssey of jams. This evening started off with new songs "Strung With Everything" and "Car Keys" to give the crowd a taste of their recent catalogue and set the tone of a free-spirited, wavy night with flowing vibes and trippy visuals which almost felt like another instrument and added more texture to their collage of sound. These were mellow openers that gracefully glided along before the band took a turn for their more experimental side. A trademark of their shows for years has been their love of road testing unreleased material that has no apparent shape or form. Their songs always transition seamlessly from one to the next and it can be difficult to determine exactly where one ends and the next begins, something only heightened when the material hasn't been heard by fans. As they slowly morphed these melodies into song structures, familiar sounds would slowly start to appear as the band would segue from the unknown into blasts from the past right when you'd least expect it. "In the Flowers" was a fun treat and hyped up the crowd right when they needed it before diving back into more of the unknown. Straying from their biggest hits, it really felt like a show for fans who've spent nearly two decades chase the band and "No More Runnin'" felt like a comfort food in the middle of a long, psychedelic trip before they headed back to the watery, distilled vibes of more unfamiliar territory. After bringing things back to order with a few more new tracks, "Cherokee" was absolutely delightful, they pulled out a few more stunners which saw the crowd come alive. "Chores" from Strawberry Jam was a massive explosion of sound that got the audience reeling with rhythm and saw the most energy of the entire evening with hard hitting percussion giving the most emphatic head bobs and fist pumps of the night. They closed out the main set with "Applesauce" which felt new again with a revitalized force that never quite came through on the record. For the encore, they took one more left turn on their journey of experimental sounds and Deakin took over vocal duties after Avey and Panda Bear had dominated the majority of the night. However, soon that familiar static crunch soon flashed from the speakers and the band unleashed an absolutely resounding version of "For Reverend Green" with Avey Tare taking control of the vocals once again to delivery his righteous scream that transported the crowd into another realm and ended the night with the most satisfying finish.
Set list:
01 "Strung With Everything"
02 "Car Keys"
03 "Broke Zodiac"
04 "Genie's Open"
05 "In the Flowers"
06 "Soul Capturer"
07 "No More Runnin"
08 "Defeat (A Not Suite)"
09 "Gem and I"
10 "Cherokee"
11 "Passer-By"
12 "Chores"
13 "Applesauce"
--
14 "Stride Rite"
15 "For Reverend Green"
Posted by marc at 2:54 PM