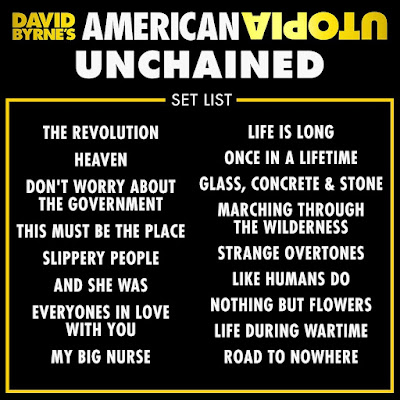 Like so many other things, David Byrne's Broadway show American Utopia has been hit by the Omicron surge of COVID-19. Instead of canceling shows, he's created a revised version until the full band can resume playing.
"We made American Utopia based on the world that was around us. Now, we've created this one based on the current week." As his band was hit by COVID, David Byrne was faced with a challenge. He could cancel the performances until the band recovered, until the current surge died down, or he could try something new. He opted for the later. In two days, he, and those in the band who also tested negative, restructured the show by stripping it of its complexities, adding new songs (some of which he hadn't played live in over a decade!), and making the whole approach feel more in line with a traditional concert than a Broadway spectacle. The payoff was worth it. With about half his usual band, Byrne improvised a new show that displayed more of his personality and came with in-depth stories for the majority of the songs he played. Typically, American Utopia has a set pace and a pre-written story that weaves throughout the songs and helps tell a cohesive tale. For this version, which he's dubbed as "unplugged, or rather, unchained," his monologues rambled on and it was clear that his nerves had kicked in, but it also made the show feel more energetic and special. This was a raw performance that kept the band on their toes, exposed a bit of vulnerability, and highlighted his punk roots. This felt spontaneous and exciting, as if the whole room was on a journey together where no one, Byrne included, knew entirely what to expect. The new additions were treasures and while those who had been anticipating seeing the show as it has appeared previously (and on HBO) may have felt slighted, this rendition was on par with the usual set. "Heaven" was an early surprise and a lovely tune that resonated deeply and the plethora of Talking Heads songs off the bat brought fantastic energy to a crowd that may have been a little on edge. His onstage banter felt inspiring and refreshing, like he was saying whatever came to mind and without a filter. He mentioned his early Talking Heads days when they all lived in a cold water loft which was a giant space without heat, hot water, or a bathroom, and how critics said it must've inspired the music and made the songs so great. He remarked how it just made life much harder and inspired him to write "Don't Worry About the Government." A few songs later, he spoke of a woman he knew in high school and her love of LSD. She'd trip on acid outside the Yoohoo Chocolate factory in Baltimore and while it didn't appeal to him, he claimed that "it seemed to be working for her" and led him to write "And She Was," a personal favorite that was a moment of utter elation, really got things going, and continued to elevate the evening. "Once in a Lifetime" somehow sounded even better with the trimmed back band than it had with the full group and again confirmed its status as one of the best songs of all time, perhaps feeling more on point than ever, and still raising the bar for the night. As he closed the main set, there was a bit of a false start as he asked if he could address the crowd once more and instructed people that it was, in fact, ok to get up and dance as this was indeed a concert and the point was to be having fun. As the crowd roared with applause, the band busted out the illustrious "Life During Wartime" and the audience erupted with joy. In traditional fashion, the encore consisted of an electrifying "Road to Nowhere," a song that once again feels more relevant than ever, and capped off a stunning, of the moment show, that was as euphoric as one could hope and imagine. It's not the same as it ever was, but still something that felt like it was once in a lifetime.
Set list:
01 "The Revolution"
02 "Heaven" [Talking Heads]
03 "Don't Worry About the Government" [Talking Heads]
04 "This Must Be the Place (Naive Melody)" [Talking Heads]
05 "Slippery People" [Talking Heads]
06 "And She Was" [Talking Heads]
07 "Everyone's in Love With You"
08 "My Big Nurse" [Brian Eno & David Byrne]
09 "Life Is Long" [Brian Eno & David Byrne]
10 "Once in a Lifetime" [Talking Heads]
11 "Glass, Concrete & Stone"
12 "Marching Through the Wilderness"
13 "Strange Overtones" [Brian Eno & David Byrne]
14 "Like Humans Do"
15 "(Nothing but) Flowers" [Talking Heads]
16 "Life During Wartime" [Talking Heads]
--
17 "Road to Nowhere" [Talking Heads]
Posted by marc at 9:55 AM