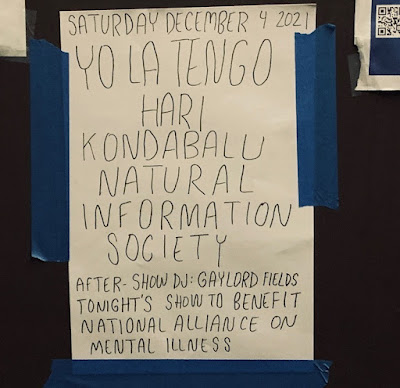 For night 7 of Hanukkah, Yo La Tengo brought the Natural Information Society to join them for their Saturday night show.
Opening with "Green Arrow" was a powerful move that immediately set the tone for the rest of the night and Ira, Georgia, and James powered along in one of the cities best traditions. Like so many other great things about New York, a Hanukkah show from Yo La Tengo is something everyone should do at least once and the Saturday night show proved exactly why that was the case. The set list was as great as ever and again showcased the incredible range of the band. Slow, soft songs juxtaposed against brilliant noise jams proved the restraint the band can have at moments and then their ability to explode with greatness the next. After a Velvet Underground cover, the band played a stunning version of "Let's Save Tony Orlando's House" that brought the house down and continued on their special journey of murdering their own classics (in a good way). Their energy was sharp and it was so thrilling to watch a band who has been playing together for so long do it with total perfection. Their ability to play off each other and balance one another throughout the show is uncanny and there is a clear reason their story has become that of legends. "Last Days of Disco" was another gem of the night and a romantic one at that as couples embraced and swayed together in the moment. The sparkle from the band glistened a little extra for that one and again proved their status as one of the best in the game. Being joined by the Natural Information Society during their set bolstered some of their tunes and elevated things to a new level with the addition of wonderful new textures and depths to their already lush catalogue. "We're an American Band" was another great highlight and set them up perfectly for the exhilarating finisher, "Blue Line Swinger." The band let it all hang out for this one and Ira was in top-form as he swung his guitar all over the stage and ripped into gnarly solos of intense, yet beautiful, guitar squalls and walls of sound that morphed into delightfully complex shapes.  For the encore, the band mentioned how they unfortunately had to miss the Dylan shows that came to town this year so they could isolate for their own shows and played a lovely cover of "I Threw It All Away." Next, they invited friends on stage to play a Ramones cover before taking on songs by the Mekons. It was a great sight and Ira was having so much fun he asked to cover "Dan Dare - Out of Space (It's a Really Nice Place)" a second time because he was unsure if he'd ever get to play the song live again. It was a humbling and special moment and solid finish to a fantastic evening. Earlier in the week, the band celebrated the 37th anniversary of their first show and all of these years later, they still bring it better than most and this show was a phenomenal example of their dexterity, but also their impressive talents as one of the most important and quintessential indie rock bands to ever do it.
Set list:
01 "Green Arrow"
02 "I Can't Stand It" [The Velvet Underground cover]
03 "Let's Save Tony Orlando's House"
04 "Mr. Tough"
05 "Did I Tell You"
06 "Is That Enough"
07 "Swing for Life"
08 "Last Days of Disco"
09 "The Room Got Heavy"
10 "False Alarm"
11 "Too Animalistic" [Angry Samoans cover]
12 "Drug Test"
13 "Upside-Down"
14 "We're an American Band"
15 "Blue Line Swinger"
--
16 "I Threw It All Away" [Bob Dylan cover]
17 "I Don't Care" [Ramones cover]
18 "Dan Dare - Out of Space (It's a Really Nice Place)" [Mekons cover]
19 "Keep on Hoppin'" [Mekons cover]
20 "Dan Dare - Out of Space (It's a Really Nice Place)" [Mekons cover]
Posted by marc at 11:51 AM