The Comet is Coming played Music Hall of Williamsburg 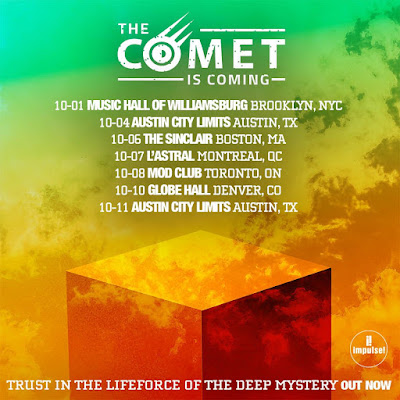 Avant-guard jazz group The Comet is Coming is having a banner year thanks in part to their astounding record Trust in the Lifeforce of Deep Mystery. They touched down to Brooklyn's Music Hall of Williamsburg to kick-off a short U.S. tour as part of a final victory lap of 2019.

Lead by jazz virtuoso Shabaka Hutchings, The Comet is Coming is an eclectic trio that consists of electric keys, synths, drums, and Hutchings' interstellar sax solos and as part of England's most profound jazz collective, they're making big names for themselves in not only their scene, but in underground music as a whole. As part of the Brownswood Recording Label,  they've positioned themselves as an absolute force to be reckoned with and alongside Hutchings' other group, Sons of Kemet, they're pioneering a new wave of jazz that continues to push the envelope and engross fans from all walks of life. As their name would suggest, the group reaches far out into the cosmos and had created a new breed of space-jazz, that incorporates the wild complexities of Sun Ra and mixes it with aggressive, punk indebted, blast-beat drumming. On stage, they push the bar to new levels and push things to such an extreme that it would be no doubt equally enthralling to see this band headline a smaller Brooklyn club on a Tuesday as it would to see them play the 3AM time slot in a tent of an elaborate festival. At times it felt rave-like, the saxophone a driving force backed by heavy synths and relentless percussion that saw the crowd grooving along like there was no tomorrow. It's classic house blended with utopian funk that almost has the crowd ready to start a pit. It's transcendent on record, but live, it's absolutely transformative. While Hutchings is clearly the celebrated performer of the group, they do a miraculous job of never resting on his star power alone. Drummer Max Hallett threw down some of the most dizzying fills and overall eccentric drum beats that it was, at time, impressive that Hutchings was able to keep up, let alone still fall into the closest position of "front man" the group has to offer. "Summon the Fire" was an absolute tour de force that rocked every inch of the building, the track building on top of itself until it was destined to self-implode, igniting a powder keg of energy throughout the crowd, raising the emotions and excitement to brand new heights, not to be outdone by another visceral rendition of "Super Zodiac." As the night carried on, "Void" was a clean break that gave Hutchings a bit of breathing room (the crowd as well), before they revved up the engines once again to hammer home the end of the show, but not without a drum solo that once again highlighted the talent of Hallett. As I stated back in July, this year's Trust in the Lifeforce of Deep Mystery is easily one of the most "out there" records I've ever included in my favorite of the year and the prog/jazz fusion continues to be something I turn to quite regularly. Seeing the band control a crowd with such mastery will be hard to forget and another driving motivator to revisit the album time and time again, but like any great group, seeing them perform is really the truest form and quite the sonic pleasure.
Posted by marc at 11:57 PM

Email ThisBlogThis!Share to TwitterShare to FacebookShare to Pinterest
Labels: Comet is Coming