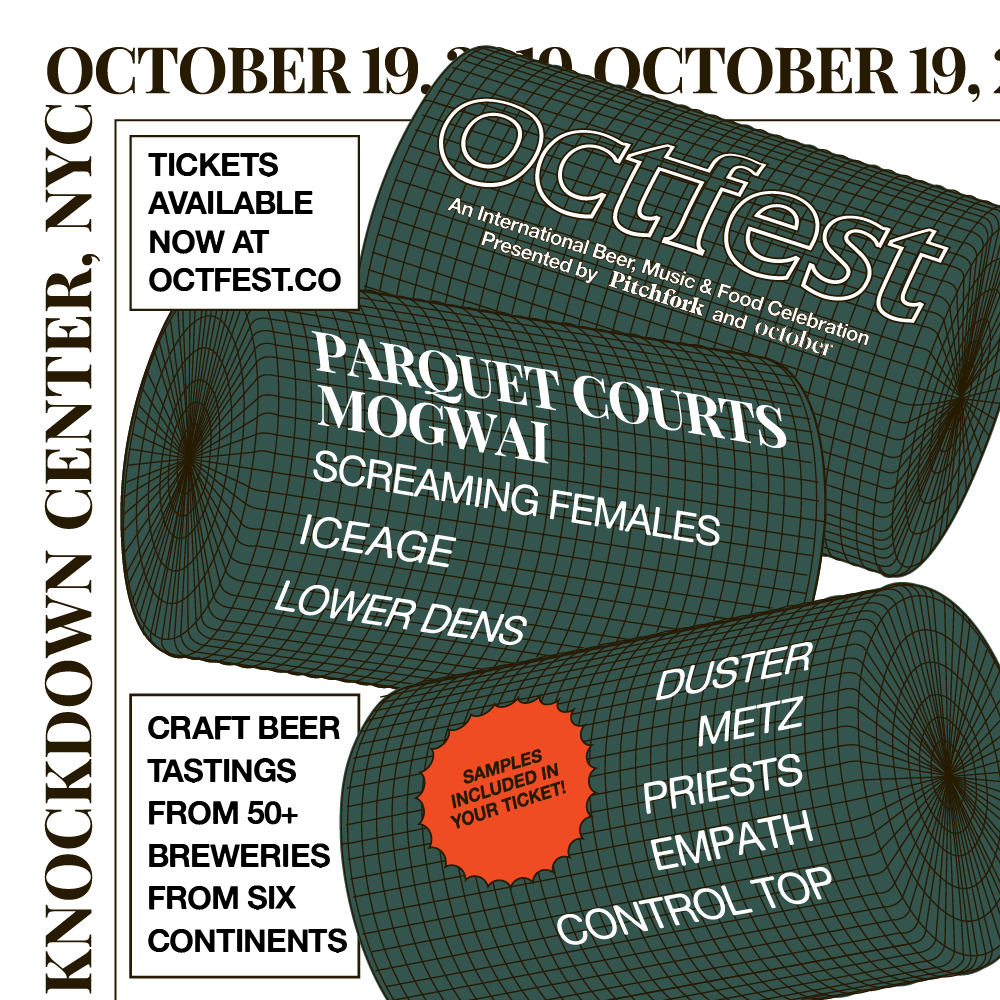 The third annual Octfest presented by Pitchfork and October was held at the Knockdown Center in Queens and featured an impressive line-up of craft beer and killer rock and roll.


While the music was excellent and by far the best part of the day, the rest of the festival felt rather unorganized and poorly executed. Food lines were epically long and the exclusive partner ran out of items rather early on in the evening and with guests wandering around a beer festival on empty stomachs, things proceeded to get a little sloppy. Perhaps billing this as equal parts beer, food, and music wasn't a great choice, but at least the music held some serious weight.

Metz were as punishing as ever, their brutal guitars slicing like an axe through the air as jackhammering drums pulverized the crowd. Their screams are chilling to the bone and highly compliment the shrieking guitar squalls that rip through their amps. Seeming them in daylight felt a bit striking, their shows usually reserved for strobe lights amidst total blackout, but the natural light did nothing to squander their brilliant intensity.

On the outdoor stage, slowcore vets Duster chilled out the vibe, their blissful, vibrant guitars like wide brush strokes, painting simple melodies with rich rewards. As one might expect, their live show isn't the most enthralling, but they sounded great even on a smaller outdoor stage. As their set carried on, the usual headbobs dominated the crowd, the audience locked-in and connected to the groove.

Iceage were the replacements for Dungen and crashed the party with spectacular color. Playing from across their discography, the swaggering punks delivered a blistering set of high energy anthems. Frontman Elias was in full form, dressed in a two-piece suit he displayed his usual style of no bullshit attitude, wrestling with the mic during every song, revving up the crowd at every possible moment. "White Rune" was still as aggressive as when they were playing basements, but newer tracks like "The Lord's Favorite" and "Painkiller" really showed the band's sharpened skills. Their fiery cow-punk sounding as emblazoned as ever inside the massive hall, their path from dark sinister punk, to festival worthy band fully complete.

Lower Dens were on the outdoor stage and despite playing tracks from their rather good new record, the band seemed very disengaged from the show. Perhaps plagued by sound troubles (it was near impossible to understand Jana Hunter when they spoke to the crowd), it was clear that something was not up to snuff and made their set perhaps one of the most awkward of the day. Back inside, however, post-rock powerhouse Mogwai completely shattered their set with explosive guitars that reached towering heights. Bits of electronics added textures to the tracks and really made their sound feel absolutely out of this world. For a band that's been playing together for over twenty years, everything felt perfectly aligned and the group was locked in, fully committed to delivering pure excellence. Classics like "Hunted by a Freak" and "I'm Jim Morrison, I'm Dead" were early favorites in the set, an absolute force of a one-two punch from the band. "Rano Pano" and "Auto Rock" were other massive numbers, but in usual form, the band closed with an absolutely crushing rendition of "Mogwai Fear Satan," a song that best captures the band's ability to dabble between heavy and soft with lightning fast changes, slamming on the distortion and precisely the right time and brining absolutely crushing moments to the crowd.

Parquet Courts closed out the day, rocking the face of their fans in an explosive hometown show that saw the band (at least for me) in a whole new light. It's never been a question as to whether the band was one of the finest in the game, but watching them headline a mini-festival proved their incredible worth. Fans went wild as soon as the band hit the first song and the energy only seemed to rise as the set progressed. A bit of punk mixed in with slacker indie rock, the pit was raging as soon as the opening notes of the first song carried out from the speaker. I knew Parquet Courts have a pretty big fan base these days, but as my friend put, "I didn't know Parquet Courts had stans like this." Somehow, it felt like the most intense show of the night, the crowd wrestling to get as close as possible and fans surfing on by overhead. On stage, the band was in stellar form and it was great to see them just have so much fun! Lead singers Austin Savage and Austin Brown traded off vocal duties throughout the night and the balance amongst the band felt incredibly strong. So far into their career, the band have avoided a slump record and while they not be getting bigger with each record, it seems clear that they're only improving as a band. "Freebird II" from Wide Awake, resulted in a massive sing-a-long which felt life affirming and downright fun and when they hit the one-two punch of "Master of my Craft" and "Borrowed Time" the night felt electric. Energy was at an all-time high and for that moment, it seemed as if the band was totally unstoppable. There are a few of their contemporaries who can still bring the rock, but Parquet Courts were in a moment all their own at Octfest. Proving not only their worth as a headliner, but as one of the best live bands in indie rock.
Posted by marc at 11:07 AM