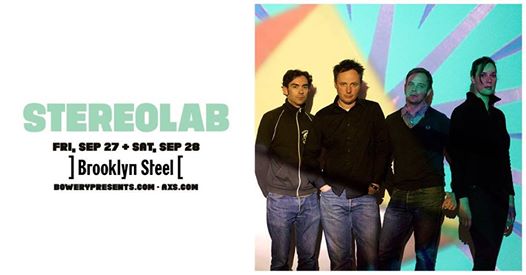 The reunited Stereolab played their first show in New York in 11 years at Brooklyn Steel on the first of two sold-out nights.


The sensational Stereolab made a modest return to New York as part of their well-received reunion tour, making for a wonderful night of space age pop. In the decade plus since the group originally went on hiatus, their cult following has not diminished and it was clear that the crowd that gathered on such a lovely Fall evening were ready to groove along to the band's glorious sound. Their synths were savvy, bass lines were pumping, and their guitar work added just the right amount of rock that allowed the band to jam properly all night long. Their impeccable blend of retro lounge music, krautrock, and dignified electronics truly make the band feel entirely unique in sound and even decades after their creative prime, the band still sounds like they're playing from the future. "French Disko" was an early hit in the night that energized the crowd from the beginning and was an early indicator at just how amazing they still sound - like no time at all had passed since they last dazzled a loving crowd. "Miss Modular" and "Metronomic Underground" were also met with wondrous applause and the audience really began to dance and embrace the band's return. Stereolab were never a chart topping band that was aiming to fill arenas, but rather the coolest band most people never knew, but one that would always be a crowd pleaser. Their classic albums Dots and Loops and Emperor Tomato Ketchup are impeccable party records that are sure to spice up any gathering by adding something that feels a bit nostalgic and futuristic all at the same time. Now that their illustrious catalogue is being masterfully reissued, it seems as though fans have come out of the woodwork to see their beloved group either for the first time or will have some wonderful memories flashback to them as the group embarks on a tour de force with their set list of heady Socialist inspired hits. "It's such a shame to breathe this capitalist air" said Sadler before the group played the lively "Ping Pong," another track that really got the crowd moving and while their chatter with the crowd was rather minimal, it was clear just how humbled they were to be back on stage. "This might be our last song, who knows what the future holds" Laetia uttered to the crowd as the band then dove into an incendiary, extended version of "Lo Boob Oscillator" which saw the band at their most wild and embellishing moments of the night. The song carried on for quite a long time, infectious grooves growing at a rapid clip and giving into to fans' desires of "maybe this will never end." The band did return for an encore and closed out the night with a euphoric "Jenny Ondioline" which felt like the perfect cap to the night. For an hour and a half, the group embarked on a mission to dazzle Brooklyn and welcome back their loving fanbase. It's hard to think that anyone leaving the show could feel anything other that a newfound love for an old band, one that can still spark excitement and wonder, and make music unlike any other. It was a perfect reminder that something can indeed come back and be just as great as you remembered.

Email ThisBlogThis!Share to TwitterShare to FacebookShare to Pinterest
Labels: Stereolab