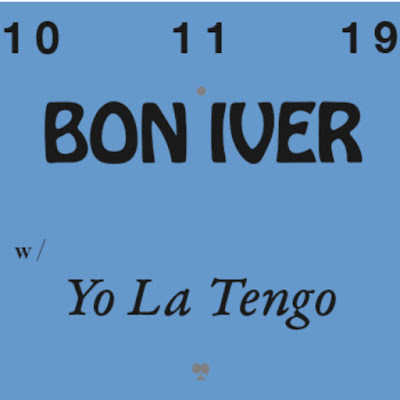 In support of this year's great record i,i, Bon Iver came to Brooklyn's Barclays Center for their biggest New York show to date.

"This is a pinch yourself moment for us. We love playing music and to play such a big venue in the biggest city in the world, it's not lost on us. Thank you for being here." Justin Vernon was no doubt in high spirits as he lead his band through an array of hits across his now expansive discography and seeing him bring this project to such incredible heights has been an epic journey for fans. To think that everything started from such humble beginnings and has now blossomed into one of the biggest names in indie music to arena headliners is rather mind blowing. No longer is Justin Vernon "the guy who recorded a beautiful, acoustic folk record alone in a cabin in the woods," but rather someone who is influencing the biggest rappers in the game and curating his own festival with other big name acts. While the music of Bon Iver has grown ever more expansive, it's still a bit mind boggling to think that this is now an arena level band, their sparse, acoustic numbers from For Emma, Forever Ago seem like they came from another mind entirely and the set focused largely on tracks from the most recent albums. Epically distorted vocals rang throughout the arena and heavy electronics felt thunderous, backing pulsating electronics. Their stage set-up looked like it was better designed for a major synth-pop band or EDM act and not something that once dropped "Skinny Love." (Don't worry, they didn't play it.) Still, it was rather explosive to hear these songs come to life and while the newer ones felt a bit like works-in-progress, watching the group work them out live was exciting. "Faith" and "Hey Ma" were wonderful and full of life and "715 - CREEKS" felt like a cold rush of blood surging through the building, Vernon's voice as captivating as ever and absolutely striking through the audience like a stake through the heart. "Salem" was another new track that felt reinvigorated with life, an Allman Brothers style jam making it soar to towering heights that allowed the band to flex new muscles and show off their splendid talents. "Creature Fear" was given an electric touch and drawn out to really maximize emotions, following through with an absolutely crashing finish, perhaps the pinnacle moment of the night. The encore was another bit of a show stoping moment, opening with the spine chilling "Holocene" which finally saw the crowd rise to their feet and quietly singalong to the epic phrase of "at once I knew I was not magnificent." A line that at times can make one feel so small, but when sung with 15,000 strangers it can take on a whole new form. "Blood Bank" was another unexpected, yet pleasant surprise that again felt larger than life. The transformation of Justin Vernon feels like the narrative of the decade, a loner from a cabin in Wisconsin that has exploded into an unstoppable force, unrestrained by genres and truly embracing his art. A story that makes him, in fact, magnificent.