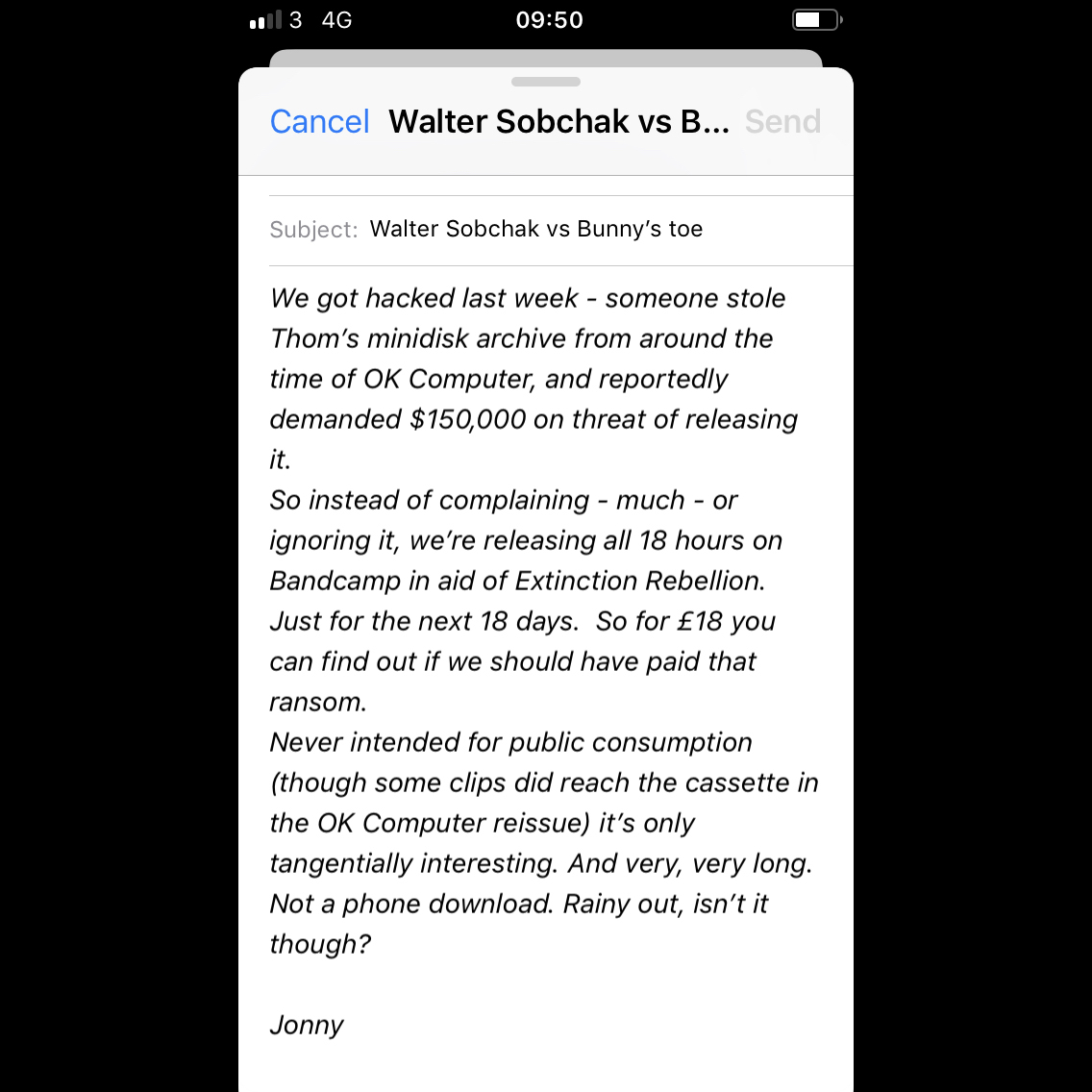 A few weeks ago, one of the most critically acclaimed bands of the past thirty years was hacked. Recordings made on the road and in the studio by Radiohead during the OK Computer days were held for ransom. Instead of caving-in on the captures request, the band made them available online for 18 days with the option to purchase them for life. I spent a few weeks listening through the sixteen plus hours of recordings rediscovering one of the most influential bands of my life.

I've seen Radiohead seven times in four different states and I've seen Thom play solo three times (including shows billed as Atoms for Peace and as Tomorrow's Modern Boxes). I drove to Tennessee in 2006 to see them headline Bonnaroo and perform their longest concert of all time (28 songs!), flew to California to see them play Coachella and saw them back-to-back last summer in NYC. I remember staying up patiently for In Rainbows to drop after paying what I wanted and ordering the massive box set companion piece. I pre-ordered the special Newspaper Edition of King of Limbs and held a listening party with my roommates when it was released. I followed the same path for A Moon Shaped Pool and the reissue of OK Computer. I even attended the Rock and Roll Hall of Fame induction ceremony so I could see David Byrne give a speech about them. Needless to say, I've always considered myself a pretty massive fan of the band, but when the leaks came out on June 11 and I saw that people had compiled a 62 page doc with in-depth detail and minute-by-minute updates for all 18 tapes, I began to question everything. Still, I took the plunge and listened eagerly to the tapes and have written about my findings which I hope resinate and reinvigorate some love for a band that has impacted my life more than almost any other and one I continuously fall back in love with time and time again.

"Climbing Up the Walls" has never been the OK Computer song I've listened to on repeat so hearing it so many times on these tapes was interesting. "Open up your skull and I'll be there, climbing up the walls." This lyric had escaped me until this recent experience and now I'm unsure if I'll ever forget it and specifically perk up when that moment of the song happens.

"Bring down the government, they don't, they don't speak for us" in "No Surprises" is upsettingly still too relevant and still sends chills to hear Yorke croon these lyrics.

"I Promise" is the song I need to hear most on the next tour. From Phil's simple drum roll to the basic guitar riff, it's a brilliant, minimal moment for a band that on their last record tried to fit as many chord changes in a song as possible (listen to "Just"). The stripped down versions that litter these tapes give a glimpse into a band that is true to this moment of time. This song was played live rather often on this tour before being locked away until the record's twentieth anniversary. It's a wonderful time capsule of a band as they were about to hit one of the most critically acclaimed streaks in modern music.

"Let Down" might just be my favorite Radiohead song of all time. I know, it's no "Paranoid Android" or "Karma Police," but it's one of the most straight-up beautiful guitar songs the band has ever recorded. The melodies twinkle and the percussion hits at just the right moment. As the song slowly seems to wind down, the guitars intertwine and gently bring the song back to life in a moment of pure sonic nirvana. When the vocals rush back to the top of the mix, there's a bit of a free fall moment, the musical equivalent to a rollercoaster peaking over a hill and that brief feeling of weightlessness. It's pure magic and listening to these takes has made me fall in love with the song all over again.

Perhaps the most impressive and rewarding part of spending time with the wealth of material here is that by the time you make it through a majority of the tapes (around number 15), you've made it through a lot of the early demos, half-takes, and live performances and you are treated to final (and in some cases unmastered) studio versions of the each OK Computer track. This feels like a reward where you've seen the sketches come to life. From early outlines and pencil drawings to full-blown technicolor masterpieces, it's the closest we've been exposed to these geniuses at work. You can connect the dots from each song's early beginning, see where they tried out different aspects, and how they eventually came together. Even more impressive, a lot of these live versions were recorded while opening for Alanis Morissette in 1996. The live debuts of so many songs is a phenomenal experience for a die-hard fan, but probably not something anyone who casually listens to the group will find exciting. Still, for the die-hards, it's a holy relic. The final version of "Lift" that comes on around 10:13 on MD125 is such an incredible take that it lives up to the hype that it could've made them the biggest Brit-Pop band in the world.

Obviously this material was never meant to see the light of day or makes its way to the headphones of fans around the world, so it's fitting that this isn't a formal release, but rather 18 tracks on Bandcamp which requires a great deal of attention and patience to process and unpack. It's a collection for die-hard fans and for me, a new way to experience one of my all-time favorite records.