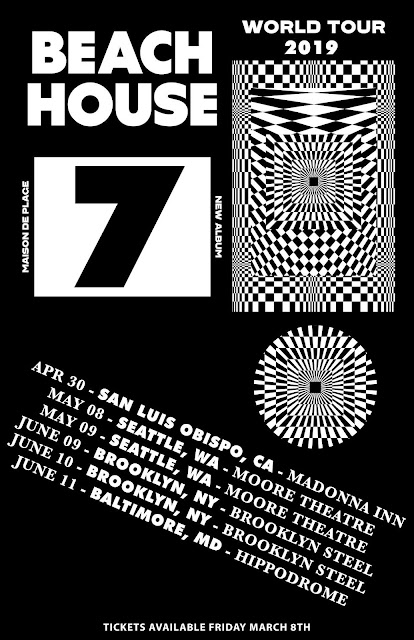 Beach House are currently on a "world tour" which leads up to their performance at this year's Bonnaroo. They played two nights in Brooklyn along the way and in support of last year's 7.

On their latest trip around the globe, Beach House are still selecting mostly highlights from my favorite record of 2018 and really laying into the more grandeur tracks, creating a sense of dream-pop delight that made the band feel right at home and in total control in the more direct and intimate setting of Brooklyn Steel (last time they were in town, they played Kings Theatre). Since they've been through town once before playing tracks from 7, this felt more like catching up with an old friend without a major life event having to take place, instead just retelling old stories and past memories but with a bit of fresher take than the last time they were in town. Songs that felt more familiar and with a certain aged grace. Kicking off the night with Depression Cherry opener "Levitation," the band set the mood for a strong and ethereal night ahead. Legrand sounding so close and direct was matched with Alex Scally's buzzing guitar that echoed throughout the room creating layers of fuzz and warmth. Shrouded in darkness for the first few songs of the night, the outlines of the band provided the only sense of movement and Legrand made sure that her head banging figure was ever so present. From bursts of full, solid colors, to rippling waters and strobing stars, the background of the stage was accentuated by perfectly orchestrated lighting changes overhead, the band really focusing hard on the effects that work best for them. From the beginning, the night felt as if it was on a trajectory towards greatness and it all came to fruition halfway through the set when the band proceeded to play "10 Mile Stereo" (a breezier version than the one on record) into "Pay No Mind" (a booming number that saw images of the band mirrored behind them in a prism of light) into "Sparks" (their shoegaze moment and perhaps the song that really defines their sound) giving way to one of the most commanding and heart-stopping sequences their lives shows have ever produced. Zoomed in cameras focused in on keys and guitar strings and rainbows of backwash took over the screens behind the band, helping to change up the mood throughout the night and bringing their sound into a more expansive picture and less so the darkness that keeps everything so intimate. Of course much to the chagrin of their older fans, Beach House still aren't quite ready to give in to the classics quite yet, the set featured nothing from their first two records nor the "throw back" album Thank Your Lucky Stars, instead truly focused on their records that sound ready for orbit. Even with their slower sounds, Victoria devotes herself, at times seeming possessed behind the keys and at others head banging along with absolute passion, and they forever seem ready to conquer any arena in the outer cosmos. It's exciting to see a band so poised and ready for the occasion, their fans genuinely pleased with their success, their shows still something that sparkles.