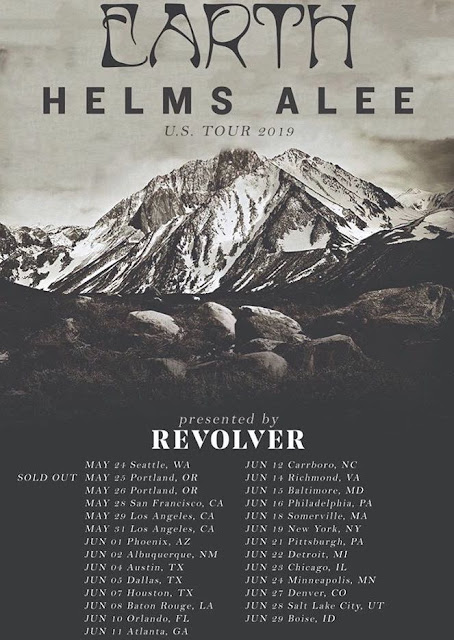 Doom legends Earth blasted through a heavy set at Le Poisson Rouge in support of their latest record, Full Upon Her Burning Lips.

The amount of restraint that Earth bestows on stage is impressive beyond belief. Their music is slow, but mutant, steady, but extreme. Droning guitar tones set the course, each note wrought with tension that never sees a true release, but rather hangs in suspense until slowly fading into oblivion. On record, it's easy to get lost in the music as it washes over and encompasses your room (actually, it's at its best when experienced through some really nice headphones, but you get the point), but live, it's a captivating event. Adrienne Davies sits behind her drums at a rather low level, never once over indulging in the music, but rather drawing back and letting the roaring guitar speak for itself. Her moves are slow and calculated, each stroke an exaggerated event that results in the most minimal of sound. At times it feels like you're watching her in slow motion, but her rhythms combine perfectly with the slow yet menacing guitar that leads every moment. In full command is Dylan Carlson, the band's de-facto leader and driving force behind the music's overpowering sound. His guitars strokes are also overblown, he sways his axe with such grandeur that it almost feels like it could be an illusion were the intensity of the music not providing a striking balance. The juxtaposition between the expressiveness of the band and the minimal music output that is a result makes for a truly entertaining show. The band (currently a trio) stuck mostly to new songs, but dipped back to "Old Black" from 2011's Angels of Darkness, Demons of Light 1, which was a highlight amongst the crowd, towards the end of the set. "The Colour of Poison" was one of the more melodic numbers of the night and saw the most movement from the crowd and heightened cheer as the night carried on. The band spent a fair amount of time tuning their guitars between each song which felt a bit funny given the nature of their playing, but did allow for some slight respite amongst the drone. Carlson continuously thanked his bandmates throughout the night and when a fan shouted out in praise of Dylan, he simply replied that it was all due to the other two people onstage. "The Bees Made Honey in the Lion's Skull" capped off the main set for another throw back and fan favorite of the night, the propulsion of the guitars feeling a bit heavier than the rest of the show and really delivering an excellent final punch. More brutal than any Post-Rock band, but never to the extreme of Black Metal, the doom/drone essence of Earth still reigns supreme and their mark on the scene is one never to be forgotten. Five years since their last album and Earth have come back hot and their live show only solidifies their status.

Email ThisBlogThis!Share to TwitterShare to FacebookShare to Pinterest
Labels: Earth