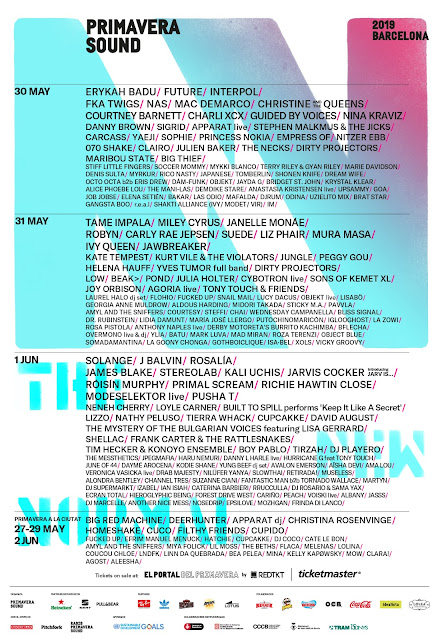 As music festivals in the U.S. start to feel more like vacation experiences and less about the music, I took off to Spain to attend Primavera Sound, one of the last major festivals where music is the center of focus and one where artists actually seem to enjoy themselves.

Located in Parc de Forum along Barcelona's coast, Primavera Sound has been one of the leading European music festivals over the past decade. Consistently boasting one of the best line-ups around the world, the festival, now in its nineteenth year, has done the best job of catering towards rising trends, while still keeping its elite musical taste in fine form. While this year's headliners felt the most pop-oriented, the undercard still stayed true to the festival's roots. This year also marked the first edition of "The New Normal" which made sure that half the bands playing this year featured a woman in the band, raising equality amongst music festivals which have long been under fire for booking primarily men.

As far as settings go, it doesn't get much better than having a festival on the beach of Barcelona and the weather over the past few days was as close to perfect as it gets. With gates opening at 4:00 PM and music ending around 5:00 AM, the crowd never really had to give in to the sun and spent most of the festival under the stars.

Friday got things started with Julien Baker playing the Auditori Rockdeluxe, a theater encompassed by the festival and used for more intimate sets. Designed like the inside of a disco-ball, the lights reflected perfectly off the mirrored tiles and added beautiful ambiance to Baker's haunting songs. Her voice echoing throughout the hall, it was the perfect festival setting for the artist. On the Ray-Ban stage, Soccer Mommy got the crowd moving along for their first ever show in Spain and revved up the energy for the rest of the day. Over on one of the main stages, Big Thief played to a massive crowd as they shared some tracks from their awesome new record. Courtney Barnett rocked her set on a massive stage and it's clear that her status of moving towards top billed artist on the poster is well deserved. Her solos were wild and by the time she played "Pedestrian at Best" the crowd was fully engaged and ready to let loose. Interpol dazzled as always and even though their most recent records haven't moved the needle, when they played anything from Turn on the Bright Lights or Antics, the crowd melted. Back on the Ray-Ban stage, FKA twigs closed out Thursday was a 3:00 AM set that was equal parts performance art as it was a concert. Backed with a group of dancers that at times performed as a Greek Chorus, she played a ton of new material in addition to classics like "Water Me" and "Two Weeks." Her movements were incredible and her voice was stunning.

Friday was the most pop driven day of the festival with sets from pretty major artists like Carly Rae Jepsen, Miley Cyrus, Janelle Monae, and Robyn. Tame Impala held down the rock-act headliner status and while they were great, they felt a bit out of place on the main stage along these queens. Earlier in the day, Lucy Dacus kicked things off on the Ray-Ban stage, her humble composure was met with great reception from the crowd and she seemed extremely touched with the killer response to "Night Shift," an early highlight of the day. "It's a beautiful day for technical difficulties" joked Snail Mail over on the Primavera stage as they struggled through some minor complications that made their bright guitar sound feel a little out of whack. Still, their set confirmed that they have a strong future ahead and the festival kept them in them great company of their rising peers like Soccer Mommy, Courtney Barnett, and other excellent women fronted indie rock bands. Back on the Ray-Ban stage, the sensational Sons of Kemet put on of the most unique sets I've seen at such a big stage at a festival. Four drummers, a tuba player, and a saxophonist don't scream total appeal, but their crowd was grooving hard to the band's unique sound of textual jazz. Watching all for drummers jam with such syncopation was rather stunning as well. Over on the main stages, Kurt Vile and the Violators jammed in the late evening sun, their blissed-out guitar melodies making for some pretty excellent musical accompaniments as the day transitioned into pop overdrive. Carly Rae Jepsen, fresh off her phenomenal new album Dedicated, kicked up the energy and set forth a pace that would carry-on for the next seven hours. The new tracks crushed live, but it was "Call Me Maybe" that took things to the next level as she jumped off the stage and ran along the crowd, high-fiving everyone on her path. Janelle Monae was next-up and made one of the most political performances of the weekend. Calling out Trump and the Republican Party specifically as she addressed the crowd to wish everyone a happy Pride Month and to confirm that no matter how you identify, you are welcome and loved at her shows. A true queen using her platform to create safe spaces and call for justice and equality for everyone. Hours after dropping a new EP, Miley Cyrus crashed into Primavera and got off to a bit of a rough start as she played mostly new material before finally dropping "We Can't Stop" and "Party in the USA" which really got the crowd going and when she closed with "Wrecking Ball," she seemed on top of the world. Tame Impala had one of the longest sets of the weekend and played to their strengths with mind bending visuals and more lasers than one could've ever imagined. Their set stuck to a lot more of their synth heavy material and less of their rocking tunes which made things feel a little slow especially in comparison to the epic dance parties provided by their headlining peers. Closing out the night, Robyn put on a stellar show that highlighted a lot of her last album, Honey, and by far one of the best moments of the entire weekend with the combo of "Dancing On My Own," "Missing U," and "Call Your Girlfriend." When the music dropped out and the crowd took over for the chorus of "Dancing On My Own," not only did it feel like time was standing still, but that musical moments may never be better than that one. If heaven is real, I imagine it would be something like that.

Tirzah packed the auditorium for one of the earlier sets on Saturday, her voice was strong and her electronics were booming off the walls for a sensational auditory experience. "We got five extra minutes added to our set for guitar tuning" said Built to Spill over on the Primavera Stage a few songs into their set, but really the extra time was supposed to be for them to play Keep It Like a Secret in full, but that didn't happen and caused one of the more disappointing shows of the weekend. On stage, the guitars sounded massive, but they appeared more like a shoegaze band as they barely looked up from their pedals and gave off no energy whatsoever. Luckily Shellac, the festival's notorious house band, took things to the extreme back at the Ray-Ban stage. Testing the volume limits of an outdoor festival, Steve Albini's guitar was turned to eleven and it's piercing squeal was matched by thundering percussion and abrasive bass lines that somehow shook me to the core despite having no walls to reverberate off of and highlighting their genius and sonic mastery. In keeping with the festival's expansive line-up, it felt right that the next set was from Lizzo as she played on the beach (I was litterally dancing on the sand) over on the Lotus stage. Without a doubt the best energy and crowd of the entire weekend, no one seemed to have more fun onstage than this queen. Her vibe and attitude towards empowering black women, the LGBTQI+ crowd, and her messages of body positivity resonated hard with the crowd as she unleashed an incredible set that barely gave anyone a chance to breathe, her bangers coming in hot one after the other. After cancelling on Coachella earlier this year, Solange graced Spain with her warmth and heartfelt compassion as she debuted songs from her recent album and thanked everyone endlessly for their support through her creative cycle. She also called out that the festival giving the same time slots to Lizzo and Tierra Whack, "why you gotta put all the black girls on at the same time? I wanna see Lizzo and Tierra too!" Rivaling the brilliant moment of "Dancing On My Own" from the night before, when she kicked in to "Losing You" the crowd went absolutely crazy, everyone jumping in unison and giving into the moment of extreme bliss. For me, the weekend came down to the Stereolab reunion happening over on the Ray-Ban stage. Almost eleven years since their last show, the band left nothing to chance and sounded positively amazing as they gave the crowd tons of energy playing their classic sound of retro-futuristic pop. "Brakhage," "French Disko," and "Ping Pong" were all mesmerizing and when they closed with "Lo Boob Oscillator" I felt a sense of pure euphoria. It was an absolutely perfect end to the weekend and without a doubt the best festival experience of my life.
Posted by marc at 10:38 AM

Email ThisBlogThis!Share to TwitterShare to FacebookShare to Pinterest
Labels: Primavera