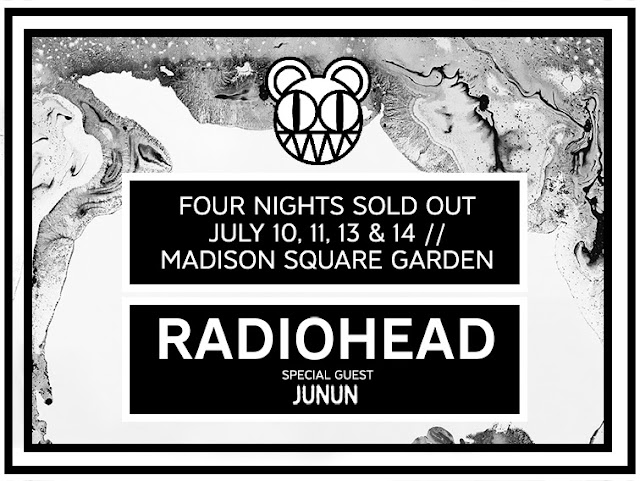 Radiohead week is in full swing here in New York City as the band is set to play four sold-out shows at the iconic Madison Square Garden.

The night began with a sparkling rendition of "Daydreaming" which saw the arena turn into a full kaleidoscopic moment, a mirror ball commanding all senses and dictating the mood for the evening ahead. From there, classics mostly reigned supreme. "Myxomatosis" felt packed and full of guitar heroism before jumping into the more elegant sounds of "Morning Bell." From there, "Optimistic" was a welcomed surprised that got the guitar feelings pumping and carried on for the rest of the evening. Even as more recent tracks made the cut of the set list, older hits really brought the night home. "Kid A" and "Pyramid Song" brought the crowd to their feet as Jonny Greenwood busted out the bow guitar anthem and really grabbed hold of the night. As they've now begun to showcase, "Let Down" continues to be a true highlight and was an emotional highlight of the night. The dueling chorus truly a mesmerizing moment that ranks amongst their best recorded pieces and only seems to get better when performed live. Of course, pin-pointing any moment at a Radiohead show feels besides the point, but near the end of the main set, the band entered a mode of true perfection and offered up the unbelievable segue of "Paranoid Android" -> "Idioteque" -> "Nude" which felt like a true larger than life period of time. From the OK Computer anthem which sees the band undergo a complete transformation on stage, through a Kid A epic and finally into one of their most recent classics, it was without question one of the most brilliant moments to witness from a band. Seeing a band that has captured such timeless memories from their fans over the course of three decades is nothing to put aside and their brilliance was once again confirmed over the course of the night. As they came back for the encore, more immediate classics from In Rainbows filled the set, but it was "The Tourist" which really set the remaining time of the night into play. The final track from their landmark album is a rarity these days but surely helped cement the night as a moment in which the band declared their time in the city and their reign as the kings of indie rock. Coming back once more, their rendition of "You and Whose Army?" felt especially bold, as the video screens zoomed into Thom's eye. Still, it was without question that the most cathartic moment of the entire show came when they dove into "No Surprises" and the entirety of Madison Square Garden sang along to "Bring down the government / they don't, they don't speak for us" which was immediately followed by rapturous applause. It was a moment of revelatory bliss which brought together twenty-thousand people into a moment of unison against the most corrupt times. To close out the night, the band ripped into "The Bends" and let the closing notes of Jonny's tremendous solo carry the night into the abyss. Even three decades into their career, their isn't anything like seeing and experience Radiohead live and something that should rang high against music fans of all creeds, not just those that have spent twenty plus years devouring their every note. In a time like the present, few musical experiences feel quite as rejuvenating as seeing the best musical import from the U.K since the Smiths and for those that have spent the better part of their lives hoping to catch a glimpse of their magic, not much holds a candle to the moment you finally get to hear these songs live.