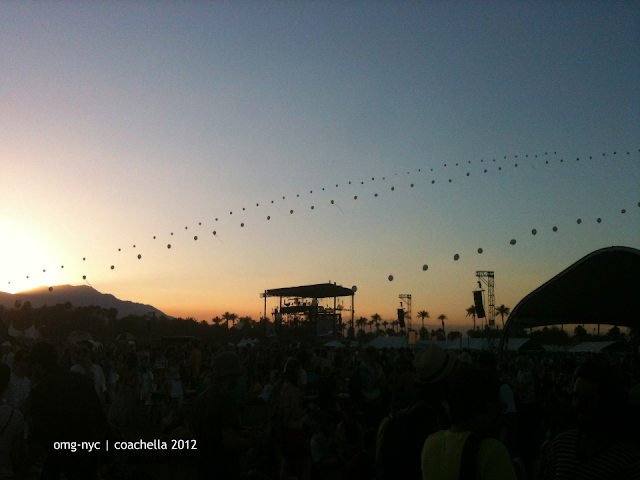 The dust has cleared, the sun has set, the feelings of heat stroke have worn off and Coachella 2012 is in the books. Unless you're living under a rock (or you don't care about music), you've probably heard that Coachella expanded to two weekends this year fully stocked with identical line-ups and after rave reviews from weekend one, the bar was set high for the weekend two. With temperatures rising to over 100 degrees, the pristine Empire Polo Fields welcomed the masses to the desert.

Capturing sets from every band over the weekend would take too much brain power to recall in full and you'd lose interest half-way through day 1, so I'll just hit up the highlights. Things kicked off Friday afternoon with sets from Yuck, Neon Indian - "It's so hot my fingers sizzle when I touch my keyboard" (that's not a song, he said that), Jimmy Cliff covering Rancid's "Ruby Soho" and the Clash's "Guns of Brixton", GIRLS - melting the audience with "Vomit", and Arctic Monkeys before we were treated to the heavy hitters. Brit-pop gods Pulp, who were playing their last scheduled show in North America, put on one of, if not the best, sets of the weekend as Jarvis Cocker sprinted from end to end of the main stage and delivered possibly the best performance by a front man I've ever seen. With unparalleled energy, the wiry Brit chatted up a storm between songs and before delivering an epic, song of the weekend, "Common People". From there it was the Outdoor Stage for the stellar combination of Mazzy Star, Explosions in the Sky - another contender for best set of the weekend, and the reunited Refused - see Pulp and Explosions in the Sky. The mind blowing magnitude of "Fade into You" in the desert followed by a powerful April 20th performance by EitS climaxing with "New Noise" is not a night I will soon forget.

As temperatures blazed on, Saturday saw an energetic Azealia Banks give tribute to Amy Winehouse by covering "Valerie" (she later covered the Prodigy's "Firestarter"...), tUnE-yArDs power through non-stop sensations from her fantastic W H O K I L L, Andrew Bird bringing Annie Clark onstage for a crooning duet, Jeff Mangum who still brought me nearly to tears by once again engulfing the audience in pure serenity, St. Vincent thrash on guitar before a kick-ass stage dive, Flying Lotus, Bon Iver - seeing the transition from a small church in London to the pre-Radiohead slot at Coachella is a crazy thing and while "Skinny Love" was awesome, "Beth/Rest" was not, and then there was Radiohead. The best live band on the planet rocked out as tight as ever playing classic after classic (all post-The Bends songs) and nailed each track with such power and greatness, the one-two punch of "Pyramid Song" and "You and Whose Army?" was particularly mind bending. Video screens floated above the band, backed with Clive Deamer on drums, and erratic lights dazzled from all sides. Thom Yorke danced like a wind-up doll, relentless energy keeping the audience hanging on every note.

Santigold got things moving on Sunday before a perfect mid-afternoon set of breezy jams from Real Estate. Wild Flag tore up the Outdoor Stage just prior to the Hives recalling early 2000s glory with their garage rock revival jams that still pack a punch a decade after they crashed into the states. Decked in tuxedos the Swedes rocked with the charm and poise that heralded their fame from day one. As the sun descended on the final eve of the Weekend, the Weeknd made luxurious and sultry R&B that doused a scorching crowd. Abel's smoked out and silky vocals hit the limit as he closed out with "House of Girls / Glass Table Girls" and swooned off into the sunset. Justice brought the house down with their neon † firmly in place on the Main Stage before the crowds swarmed for the explosive reunion of At the Drive-In. Cedric Bixler-Zavala slithered the stage inbetween leaps from the stacks of speakers. As the crowd for Dr. Dre and Snoop Dog grew by the second, the hip-hop legends took to the stage with a blazing vengeance immediately launched into "The Next Episode". A star powered performance ensued, featuring 50 Cent performing "P.I.M.P." and "In Da Club" and Eminem delivery a raw "Forgot About Dre". Dre and Snoop rocked "Nothin' But A 'G' Thang" and "California Love" to supreme approval and of course, there was Tupac. The now infamous, and underwhelming (yes, I said it) hologram resurrected 'Pac for two brief tracks before disappearing to endless screams of devotion, however the forever-young Tupac throwing down rhymes with an obviously aged Snoop left some unsettling feelings.

Of course there were other highlights like hearing Noel Gallagher dish out the classic "Don't Look Back in Anger", the Buzzcocks tear up "What Do I Get?" and the howl of WU LYF among others while doing simple things like wait in line for the bathroom that made the festival in the desert live up to its legendary status, but it is more than just the bands that made the trip to the desert so memorable, it's the experience and the idea that music can bring together thousands of people for a lost weekend in paradise.
Posted by marc at 11:42 PM