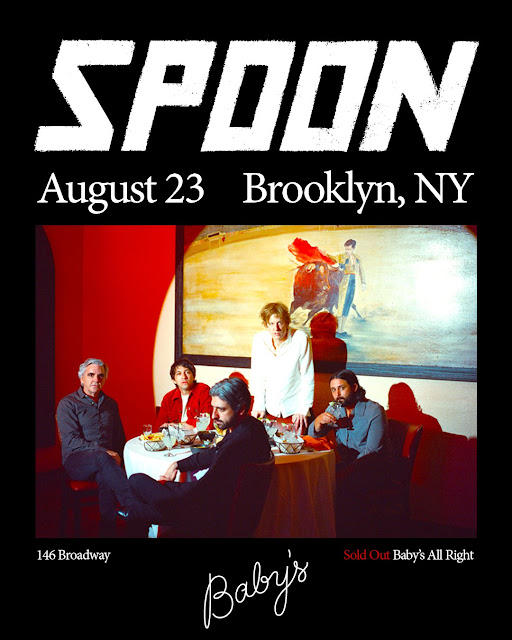 Ahead of their upcoming tour with Interpol, Spoon dropped by Baby's All Right for an intimate, surprise, warm-up show.
The last time Spoon were in town, they played a show at Hammerstein Ballroom which holds about 2,200 people, so a headlining set at Baby's All Right, which holds 280 people, was a rather special affair. As one of the most consistently great American rock bands of the past twenty years, seeing the band in such a small venue was an absolute treat and the band proved why they've become a legacy act and one of the best live bands in the business. Bursting with energy, Britt Daniels led his band through a charged-up, career-spanning set full of their biggest hits. Opening with "Small Stakes" from Kill The Moonlight (which turned twenty this past weekend), it was clear that this would be a show for the ages and that the band was ready to celebrate the small, but mighty crowd. Immediately, the band followed it up with "The Way We Get By" and caught the crowd completely off guard, raising the bar so high so early in the night, but they managed to keep the pace up for the remainder of the show and powered on, destroying every song on their set list with force and conviction. Daniels strutted the stage with power and perseverance, owning each and every moment, dazzling the crowd with his swagger and swift, crushing guitar licks. It's hard to find many bands where the new songs are just as thrilling as the classics, but when the band kicked into "Wild," off their latest record, the underrated Lucifer on the Sofa, it was a euphoric moment that felt larger than life, the song building with momentum before erupting in a sparkling guitar solo. After another slow build-up, the band launched into "The Underdog" and the crowd responded with one of the loudest roars of applause of the night as the band carried out an absolutely triumphant rendition of the song, one that brimmed with stellar execution and passion, once again confirming their status as one of the finest rock bands in the country. From there, it was two more of their newest singles, "My Babe" and "The Hardest Cut," which both hit with more fortifying strength and affirmation that their ragged, sometimes angular guitar, can still bubble up into pop-leaning rock numbers that can ignite a crowd. "Inside Out" was another sparkling gem that got a massive response from the audience providing for one of the more magical moments of the evening as Britt really seemed to connect with the tiny room, digging down deep to deliver a killer night that no one in attendance will soon forget. It's not often you can see such a tight, professional band deliver a stunning set in such a small venue and seeing these guys totally tear it up was something memorable beyond compare. For the encore, the band returned to dust off "The Mystery Zone" from Transference as well as fan favorite "I Turn My Camera On" before ending the night for good with one more new tune and finally "Rent I Pay" from They Want My Soul. After a month off the road, Spoon seemed ready for action and made sure to leave everything on the stage in Brooklyn. A night to remember for any casual fan in attendance and one never to be forgotten for the die hards, but regardless of where you may fall on that spectrum, it was surely something special. A night of epic rock proportions done by true legends of their craft.
Set list:
01 "Small Stakes"
02 "That's the Way We Get By"
03 "Something To Look Forward To"
04 "Got Nuffin"
05 "Lines in the Suit"
06 "Wild"
07 "Metal Detektor"
08 "The Underdog"
09 "My Babe"
10 "The Hardest Cut"
11 "Lucifer on the Sofa"
12 "My Mathematical Mind"
13 "Inside Out"
14 "Don't You Evah"
15 "Do You"
16 "Jonathan Fisk"
--
17 "The Mystery Zone"
18 "I Turn My Camera On"
19 "Feels Alright"
20 "Rent I Pay"
Posted by marc at 11:14 PM

Email ThisBlogThis!Share to TwitterShare to FacebookShare to Pinterest
Labels: Spoon