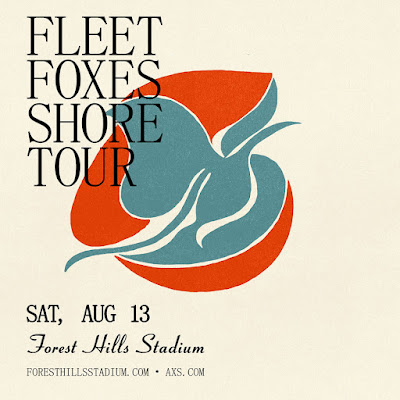 Fleet Foxes wrapped up their 2022 North American tour on a gorgeous summer night with a stunning show at Forest Hills Stadium in Queens.
On their first tour in support of 2020's phenomenal Shore, Fleet Foxes pulled out all the stops and appeased fans in lead singer Robin Pecknold's adopted home of New York City for a special show that was undoubtedly worth the wait. Waisting no time, the band kicked the night off with the opening tracks from their most recent album, setting the tone for the evening and helping to usher in the magic that would surround the show. Following the sweeping sensation of "Can I Believe You," the band segued brilliantly into "Ragged Wood" which saw massive cheers from the crowd and infinite phones in the air to capture the majesty of the track in all of its glory. More classics such as "Your Protector" and "White Winter Hymnal" followed suit and maintained the energy and fruitfulness of the rich, luxurious harmonies that carried on the breeze, making for surreal, breathtaking moments. Considering it was the last show of the tour, Robin's voice sounded supreme, hitting each and every note with precision and force, the crowd on the edge of singing along, but never going too hard, still letting Pecknold dominate the performance. For the middle of the set, he played solo arrangements and really showcased his talents, commanding the entire theatre and drawing a silence unlike anything we'd hear for the remainder of the set. At his most intimate and vulnerable, the night hit its peak and the beauty transcended when flashlights shone across the amphitheater as fans slowly joined in to illuminate the crowd, moving Robin to tears. "If You Need To, Keep Time on Me" was the only track included from the band's third record, Crack-Up, but it was an equally moving one that saw a hush once again befall the venue, everyone firmly focused on Robin and him alone. For the encore, he returned in special edition tennis gear to mark the end of the tour, but also in homage to the stadium itself. Leading things off with another solo song, this time "Montezuma," the crowd swooned for the beloved vocals, but when the entire band returned (also in matching tennis gear) and we were hit with the final vocal harmonies, it took things to new heights. The punching horns from the Westerlies provided even more momentum throughout the night and accentuated the performance, giving more texture to the band's sound. "One thing that's been happening on tour, is that Uwade [the band's opening act], Skyler, and I have been talking about our love of the Strokes!" said Robin to much applause before the band launched into an unexpected and almost out of character, but nonetheless fantastic, cover of the band's "Under Control," which saw dueling vocals and unrivaled love for music as giant smiles stretched the faces of everyone on stage. Since they closed the main set with the triumphant "Grown Ocean," a track that feels as forceful and moving as ever, they chose to end the night with "Helplessness Blues," a song which hits with less of a bang, but ends up delivering the same amount of hope. At over two hours, it was a marathon of a set that displayed the band's complex and endearing songwriting to one of their largest audiences in New York as of yet and it was clear that the band was living for each moment. After one song, Robin commented on living here in April 2020 and talked about "seeing people come together like that, it was beautiful," noting the significance of returning to the city and the emotions of ending the tour here. After a long time away, Fleet Foxes roared back with absolute grace and beauty, making for one of the more perfect Saturdays in August one could ask for, an incredible band that has settled into their prime and capable of creating mesmerizing moments time and time again, each more magical than the last.
Set list:
01 "Wading in Waist‐high Water" (with Uwade)
02 "Sunblind"
03"Can I Believe You"
04 "Ragged Wood"
05 "Your Protector"
06 "White Winter Hymnal"
07 "Phoenix" [Big Red Machine cover]
08 "Mykonos"
09 "If You Need To, Keep Time on Me"
10 "The Kiss" [Judee Sill cover]
11 "Drops in the River"
12 "Blue Ridge Mountains"
13 "Grown Ocean"
--
14 "Montezuma"
15 "Tiger Mountain Peasant Song"
16 "The Shrine/An Argument"
17 "For a Week or Two" (with Uwade)
18 "Under Control" [The Strokes cover] (with Uwade)
19 "Going-to-the-Sun Road" (with Uwade)
20 "Helplessness Blues"
Posted by marc at 12:46 AM