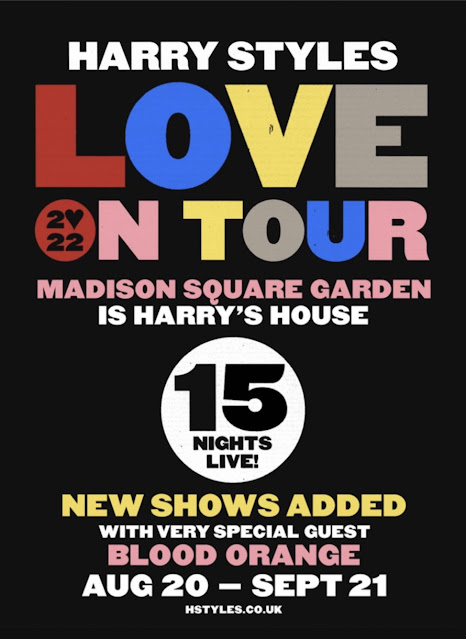 Harry Styles welcomes everyone to his home with decadence and grace as he moves into his residency at Madison Square Garden.
Shortly after Blood Orange finished a great opening set, the house lights came on and One Direction's "Best Song Ever" blasted over the building's sound system. I don't think it's hyperbole to say that I'm not quite sure I've ever heard a reaction quite so intense as the response that hypnotized the crowd ahead of Harry Styles' fifth of fifteen shows at the World's Most Famous Arena. The arena erupted and the floor descended into pure pandemonium. Obviously the stakes for the night were high, but this form of ecstasy felt unlike anything I've ever experienced. When the lights went down, the sound somehow increased and the piercing screams rose to new levels. Rising from the stage and jumping into action, Harry wasted no time to take control of the stage, boogieing to no end and blowing kisses to everyone he made eye contact with in the pit. Acting in full professional mode, Styles was a true showman, giving the crowd exactly what they wanted as he sprinted across the stage in the middle of the arena, never once letting up on energy or good vibes. "I promise to have as much fun as possible" he said early in the night, "and you have to promise to do the same!" he ordered to everyone in attendance. (Not that there was any doubt that anyone in the building was planning on doing anything else.) "Adore You" got the disco vibes going early, giving the night some sultry moments between the utter pop sensations. Never standing still, Harry was on fire throughout the night, racing across the stage and basking in each moment with unbridled joy. Shaking his hips and throwing back his hair without a care in the world other than to entertain the masses, it's became apparent that the theme of Harry's House was present in more ways than originally met the eye. Now that this third album is under his belt and gave him one of the biggest songs of his career, it's clear that Harry is feeling more comfortable and confident than ever and these residencies across the country allow him to settle into a groove and do what he does best, entertain. Once he felt the crowd was warmed up, he announced that the second half of the show would be a bit more of a party. "Cinema" into "Music for a Sushi Restaurant" once again proved he was indeed correct and has become an expert in curating his show. Bringing a live horn trio onstage to accentuate the moment was a brilliant move, again proving his leap to the next level of performer, adding more textures to an already booming performance. It's hard to tell what the exact pinnacle of the night was, but when he jammed through his old group's signature "What Makes You Beautiful." it felt like we had finally come close to pop nirvana. After deafening screams briefly subsided, "Late Night Talking" brought back the synthy disco beat for more infectious grooves and all around shimmering melodies to keep people bouncing along to the bubbling rhythms. Of course any chill factor instantly rescinded once the riffs to "Watermelon Sugar" rang out across the arena leaving the crowd to dissolve into pure bliss. Epic screams rang down from the rafters as Styles continued to jive across the stage, kicking to the skies and doing his best to connect with everyone within eyesight. For the encore he returned to deliver a resounding and sprawling "Sign of the Times" which felt transcendent, grabbing hold of everyone with force and conviction. Earlier in the night, Harry read a sign from a fan in the crowd that said the night was serving as her divorce party and sneakily asked if he'd play the song "Medicine." Styles came through and added the track to the set list before ending the night with the latest song to change his life, the undeniable jam "As It Was" which continues to be an amalgamation of pop brilliance with new wave garage pop undertones. By now Styles is a veteran pop star and he's been acting that way ever since he took on his solo career. He's never needed anyone to validate that fact aside from his fans and it's been clear that he's always doing what he can to explore and push his boundaries. Pulling into Madison Sq Garden for fifteen shows confirms that not only his diehards would go to no limits to guarantee his success, but that even casual fans who know him for the hits alone can understand the joy that comes with seeing one of the biggest pop stars plop down to play their new version of a residential gig. Leasing out the biggest arena in the city is a move, but Harry Styles has demonstrated that he is ready for the occasion and prepared to dish out the hits with unrelenting energy and passion. Everyone should be so lucky as to catch a kiss from him as he does so and watch the euphoria as it happens. A house party unlike any other, it's a celebration of love and enjoying the company of those who bring you the most happiness. Something we've all wanted and needed for so long.