Bill Orcutt - "At a Distance" 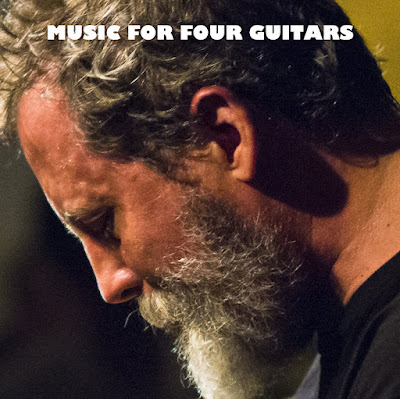 Bill Orcutt has announced a new album that's due later this year and he's shared a few tracks including the highlight, "At a Distance."
In 2021, Bill Orcutt and Chris Corsano released the excellent Made Out of Sound and this fall, Orcutt will follow it up with a solo record dubbed Music for Four Guitars. He announced the new album over the weekend and with it, shared four of the record's tracks. According to a press release, "in a trajectory full of about-faces, Music for Four Guitars splices the formal innovations of Bill Orcutt's software-based music into the lobe-frying, blown-out Fender hyperdrive of his most frenetic workouts with Corsano or Hoyos." If you are a fan of any of his previous releases, this should be an immediate welcome and for those who've perhaps been turned off from the abrasive and often intense past work, this is a bit more meditative. Of the four tracks that have been shared, "At a Distance" is the one that locks into a groove and is perhaps the most accessible, and in my opinion the best, of the songs now available. From the same press release, the track "[bulldozes its] way through melodic content with a touch of the motorik romanticism of New Order or Bailter Space." It's a hypnotic spiral of wooly, steel guitar sounds that incorporate the free-jazz notions that have always been present in Orcutt's work, but makes it a bit more transfixing and hopefully something that finds him a wider audience. No matter what, it's an incredible, attention grabbing, and vibe inducing song that I've already declared one of the best of the year so far!

Music for Four Guitars is out September 2!
Posted by marc at 6:12 PM