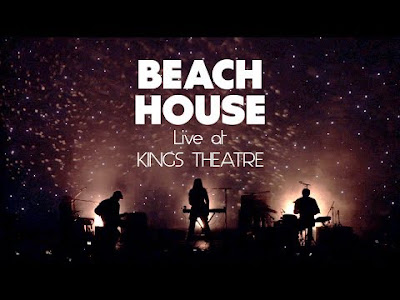 The best band of the past two decades brought their impeccable live show to Brooklyn and reminded us all that few have ever been this great.
Seeing Beach House live is a transcendent experience, like living in a waking dream, or exploring the upside down of Stranger Things if it was, you know, happy. Their ability to transport a crowd into the cosmos and through other realms is something of pure euphoria and as they took Brooklyn's Kings Theatre on a ride on their space craft, it was a much needed escape, but also a reminder of the power that live music can have on the conscious. "Hello," Victoria said through a cloud of smoke as the night began, not yet emerging from the shadows, but already captivating those in front of her. It was one of few words spoken from the band, but it was enough to receive a rapturous applause and steady stream of screams from a crowd already head-over-heels for the band. Plumes of fog filled the stage and we were swiftly carried away on an incredible journey of illustrious synth-pop that felt like the soundtrack to a ride through the galaxy. Waves of colors splashed behind the band, who remained backlit for the majority of the show, letting the ethereal aesthetics take hold and drive the emotions of the night. Reveling in the magic of the band, it was easy to get lost in their sound of crystalized dream-pop that effortlessly floated between soundscapes of hazy, interstellar melodies and beats you'd imagine dominating the clubs in the lost city of Atlantis. It's often been a critique that Beach House has written the same song dozens of times over, but seeing them bring their discography to life only reaffirms how much the band has evolved from their beginning. It's hard to imagine that the band who released Devotion could somehow turn into the one on stage, full of energy and heightened production values that lifted them into the stratosphere. If anything, it felt as if the theatre was almost too small, the songs bursting at the seams of the venue ready to blanket the surroundings with extreme beauty. Their sonic trajectory has never veered off course, yet somehow the band consistently pulls out new tricks that further their sound into something beyond belief. "Once Twice Melody" ushered in the night and gave the full breath of their latest elements which would be a consistent factor for the evening, but with each song, they seemed to somehow give even more and fully embrace the warm reception the crowd so easily offered to them. "Silver Soul" was an early highlight and a beautiful throwback that quickly transfixed the audience as we submitted to the absolute power on stage. Functioning as a trio, the addition of a live drummer only added to the band's dexterity and drove home the propulsive rhythms that dominate their latest albums. With each release, Victoria and Alex subtly introduce new textures that permeate their sound with little resistance. On their most recent record, trap-inspired beats help establish these new palettes without jeopardizing or challenging anything that has already made them one of the most consistent bands of the past twenty years. "We're going to travel back in time" said Legrand before they served up a rapturous version of the exceptional Teen Dream wonder "Take Care" as lights danced around the theatre, wrapping the room in a blanket of starlight. Of course what makes a live show exciting is the unexpected and when they slowly intro'd new album standout "Superstar," it was a moment that brought something fresh and unique. Beginning with isolated vocals and slowly adding new layers, the song took on a new life before it climaxed into the version I named one of the best songs of 2021. Their stage show has transformed immensely and despite still feeling intimate and humble, they've truly mastered their craft in terms of excess and expanse. Like a sound bath washing away the troubles of the world, seeing Beach House can feel like moments of sheer tranquility and an exquisite period of escapism. Even as their sound has blossomed over time, their minimal stage set-up somehow seems to have kept up with their evolution as well. Flashes of colors, sparkling star scapes, and Rothko-esque backdrops only enhanced the vibes without grabbing any attention away from the tunes. In fact, it wasn't until the end of the night where it felt like everything congealed into one blown-out sensation. When a band never misses, the end of a show can feel too soon, but after so many years of refining their craft, Beach House know how to deliver and how to end on a high note. Kicking off the encore with "Myth" perhaps got the biggest reaction of the night and reminded us all of their existential question that ends so many of their shows: "what comes after this momentary bliss?" Fortunately for us, nothing about the band feels momentary. At eight records into their career, they've conquered any and all expectations, establishing themselves as peerless visionaries and commanders of their own universe. Much like the cosmic backdrop behind them, the possibilities of Beach House seem endless and we happen to be lucky enough to be alive at the same moment.
Set list:
01 "Once Twice Melody"
02 "Lazuli"
03 "Dark Spring"
04 "Silver Soul"
05 "PPP"
06 "Pink Funeral"
07 "Superstar"
08 "Drunk in LA"
09 "Take Care"
10 "Masquerade"
11 "Wherever You Go"
12 "Lemon Glow"
13 "Modern Love Stories"
14 "Space Song"
15 "New Romance"
--
16 "Myth"
17 "Over and Over"
Posted by marc at 8:06 AM