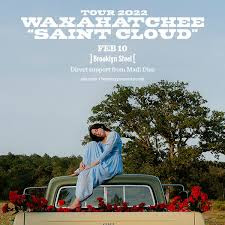 Katie Crutchfield brought her band to one her biggest NYC shows yet, headlining Brooklyn Steel in support of 2020's Saint Cloud.
It's crazy what's happened with time over the past few years. In 2020, Waxahatchee released the stunning, powerful, and instant-classic Saint Cloud, but for a long time had to sit tight. For nearly the first year after the album was released, the pandemic continued to rage on and shows weren't on the radar. In some ways, that could've drastically impacted certain bands and artists. Keeping the hype going for so long is a difficult task and with music being released at such a fast pace, it was entirely possible that interest would wain and playing big venues might still be out of the cards for some people as their time in the spotlight fades. None of this was the case for Waxahatchee's headlining show in Brooklyn on Thursday night, however. The venue was packed and fans were ready to dance and sway along to the majestic sound of Crutchfield and her stellar group of musicians. In a rare, but exciting move, they played all of Saint Cloud, albeit not in order and with other songs in between, yet it was still thrilling to hear every song from the album. Crutchfield's voice was immaculate, reaching new heights and sounding as crisp and precise as on record. So much to the point where people in the crowd wondered "is this somehow even better live?" Typically the magic of a studio can bolster an artist's performance, but Katie is forever magical all on her own and she proved it on stage. Her sound was rich and lush with two electric guitars to compliment her steady, breezy acoustic to deliver something full of texture and gorgeous harmony. The night felt perfectly balanced, there were moments of elevated joy when she hit the opening notes of "Can't Do Much" and "Lilacs" that sent the crowd into a bit of a tizzy as her country swag really kicked into gear. Still, her voice sounded its absolute best when she busted out a cover of her all-time favorite singer, Lucinda Williams, and delighted us all with a stellar rendition of "Fruits of my Labor." Her voice soaring like never before, it was an a tremendous joy to see her so elated to perform the track. She ended her main set with "Fire" and got her biggest ovation of the night and gave the crowd a final moment to groove along to her sultry twang. However, when she returned for the encore, it was a thrill to have a few more moments with her and to have it all end with a Dolly Parton cover was just the icing on the cake. Nearly two years after her career defining album (so far), Waxahatchee is hitting their stride as a band and delivering fruitful, tight-knit performances that resonate deeply with their audience. The signs of a truly special band at the height of their powers.
Set list:
01 "Oxbow"
02 "Chapel of Pines"
03 "Can't Do Much"
04 "Recite Remorse"
05 "The Eye"
06 "Hell"
07 "Silver"
08 "Sparks Fly"
09 "Lilacs"
10 "Arkadelphia"
11 "Peace and Quiet"
12 "Tomorrow"
13 "Singer's No Star"
14 "Witches"
15 "War"
16 "La Loose"
17 "Fruits of My Labor" {Lucinda Williams cover]
18 "St. Cloud"
19 "Fire"
--
20 "Resentment" [Madi Diaz cover] [w/ Madi Diaz]
21 "Under a Rock"
22 "Ruby Falls"
23 "Light of a Clear Blue Morning" [Dolly Parton cover]
Posted by marc at 8:47 AM

Email ThisBlogThis!Share to TwitterShare to FacebookShare to Pinterest
Labels: Waxahatchee