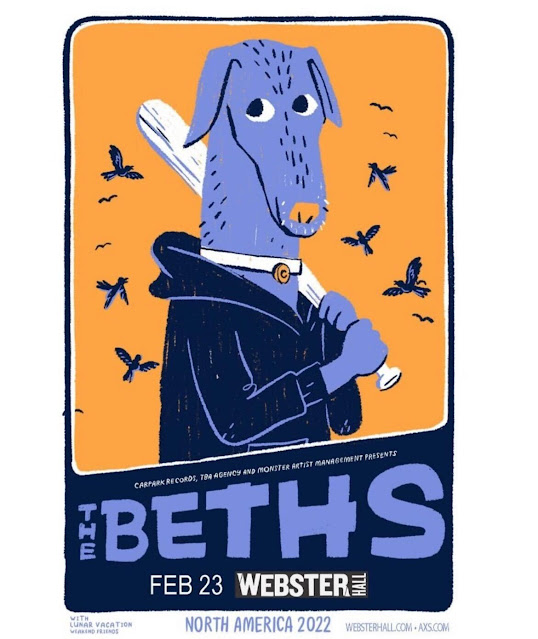 After rescheduling some gigs earlier in the year, The Beths made it to Webster Hall in support of 2020's very good Jump Rope Gazers.
For the past two years, The Beths have been sequestered in their home country of New Zealand. Unable to tour in support of their last album due to COVID, the band seems to have been perfecting their live show after a string of gigs across their homeland. On their first tour outside their country since 2019, The Beths are looking to make a name for themselves and absolutely crushing any and all expectations of what their live show could be. On record, their songs have pep that instantly lightens-up a mood and sets forth some head bobbing motion that feels totally freeing. They bring the nostalgia of the Flying Nun sound of jangle-pop and '90s alt-rock and mix it with sugar-coated pop-punk for a result that breaks the mold. In concert, they elevate that to the nth degree. From the moment they took the stage, the quartet were amped-up and ready to rock. Never once holding back in energy and pure excitement, the band blasted away at their pop-punk anthems that exceeded even the most high expectations and delivered on consistent thrills. Their sound is every bit as adrenaline inducing as one could hope and the crowd ate up every moment of it. Huge bursts of guitar surged through the audience, continuously propelling the band's momentum so much that for the first three songs, it seemed as if their energy would never actually peak and the night would only get more and more enthralling. While that obviously did come to a ceiling, the room could hardly contain the rapture that was being delivered from the stage. The sugary-sweet choruses rocketed to new heights with soaring harmonies that came across with huge rewards and guitar solos that swelled to the extreme. It was hard to tell a particular fan favorite since everything felt particularly magnetic and brimming with electricity, however the opening of "I'm Not Getting Excited," "Not Running," and "Great No One" set a very high bar for the rest of the night and really saw fans giving in to relentless energy. The high octane enthusiasm was even unleashed with the new song "A Real Thing," as fans embraced the recent release with thunderous applause and mid-song cheers that made it already feel like a classic in their set list. Coming back to play "River Run: Lvl 1" was a brilliant start to the encore and perhaps gave way to the most subdued moments of the night (shoutout to the person who held an actual lighter in the air) all before rushing back into the extreme with "Dying to Believe" to cap off the night. Playing their biggest NYC show to date, the band executed a nearly flawless performance that was an unexpected triumph with a total life-affirming release of rock and roll bliss.
Set list:

Email ThisBlogThis!Share to TwitterShare to FacebookShare to Pinterest
Labels: The Beths