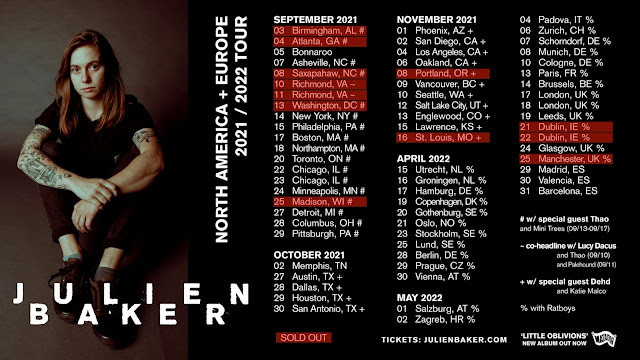 In support of this year's excellent Little Oblivions, Julien Baker played to a packed Beacon Theatre for her grandest New York City appearance yet.
So much has changed about live music since the pandemic. However, Julien Baker takes the changes to another level with her latest show. Transitioning from a solo, singer-songwriter playing alone onstage to leading a full band through transformational rock epics is quite the journey and Baker totally nails it. Opening with the blasts of "Hardline," the crowd immediately responded with massive cheers and the infatuation would last until the final note of the night. Given that this is her first tour with a backing band and this was still one of her early shows, it was rather stunning to see such a performance. Erupting with swells reminiscent of powerful acts like Mogwai and Explosions in the Sky, Baker raised the stakes with her latest record and hearing these tracks live reaffirms their overwhelming gusts of beauty. With each massive burst, the crowd continued with rapturous applause and screams. "I like when people sing at my concerts," Baker said after "Sprained Ankle," "in case anyone was wondering. I know some people might feel unsure if that's cool, but I like it." Directly after, she responded to a fan's call-out: "Did someone just ask if you can stand? You're asking me? Yeah, let's go!" People rose to their feet and remain for the rest of the show. Despite breaking through with more intimate songs, it was clear that fans were thrilled to hear the new songs live and Baker stuck mostly to recent material for the majority of the set list. Even so, her pacing was fantastic and exemplified her range with stellar execution. "Song in E" was a remarkable vocal performance and led directly into an energized "Faith Healer," again garnering much acclaim from the crowd.  In addition to the opening number, "Ringside" and "Highlight Reel" had the loudest cries of utter elation from the crowd and their weight felt even more impressive live than on record. Baker's rise has been sensational and the new songs confirm her undeniable talent and cement her as one of the most dynamic voices of her generation. Her ability to scale her songs in such a remarkable fashion magnifies her skills with great conviction. "I don't know why I played alone for so long" she remarked at one point and it was hard to think of a proper reply. Three records in and Baker sounds more confident than ever, her sound fully realized and being performed with absolute force. Her presence on stage still the tiniest bit reserved until she loses herself to the music and releases such exquisite tension. Hair flips and thrashing guitars now fit the bill and lift her to bonafide rockstar status. It's exciting to see the rise of an artist and Baker is without question transcending to a new level.
Set list:
01 "Hardline"
02 "Bloodshot"
03 "Shadowboxing"
04 "Favor"
05 "Relative Fiction"
06 "Highlight Reel"
07 "Sprained Ankle" (Solo)
08 "Something" (Solo)
09 "Televangelist" (Solo)
10 "Song in E" (Solo)
11 "Faith Healer"
12 "Heatwave"
13 "Ringside"
14 "Tokyo"
15 "Repeat"
16 "Sour Breath"
17 "Ziptie"
--
18 "Appointments"
Posted by marc at 8:12 AM