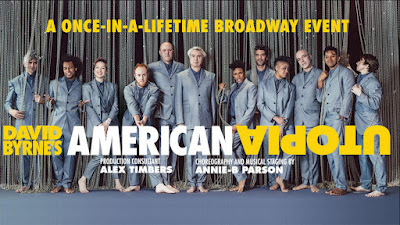 After postponing the second run of his show American Utopia due to the pandemic, David Byrne's epic Broadway run came back to life. Same as it ever was.
"Thank you for leaving your house." That's the first sentence spoken by Byrne as the lights comes up on American Utopia. Funnily enough, this isn't an addition now that it's back. This was always the opener, but now it feels that much more special and authentic. While the content of the show hasn't changed a bit, the overall theme of human connections felt even more relevant than it did the first time. Being able to attend opening night was special, not just for the audience, but it was apparent for the performers as well. The standing ovations were plentiful and extensive and it was clear that Byrne was humbled by all of them. Overwhelming joy aside, the show was as smooth as ever and you'd be hard pressed to tell that it had been nearly two years since they last performed. Everything hit with such conviction and passion, each step meticulously taken, and every movement was executed with such poise. As I wrote during the show's initial run, watching begs the question "is this a Broadway show or a concert? Do we remain seated or do we get up and singalong to each mesmerizing tune?" Even now, I was a bit unsure, but as the grooves started to flow, the crowd became restless and got to their feet. "Once in a Lifetime" once again lived up to its name and was the first of several sublime moments of the evening. As the song started, the person next to me leaned over and said "this is the best song of all time" and I quickly replied "it sure is" as we both rose to our feet along with the rest of the theatre and collectively lost ourselves for a moment in pure rapture as the song played. An endless applause followed which really defied any and all expectations I had, but brought home the power of live music, reinstating the theme of human connection on a different level. Impeccable choreography is just as central to the show as is the music and being able to see such a stylized performance soundtracked to some of the greatest songs of all time felt like a dream come true. Moments of elation were abundant to the extent that identifying a single best moment feels near impossible. Even after hearing what might be the greatest song of all time, still came "Born Under Punches (The Heat Goes On)," "Every Day Is a Miracle," and another emotional peak performance of "Burning Down the House," which David prefaced with "you're allowed to get up and dance in the aisles, you know. If you remember how to do that with a bunch of strangers. The fire marshals did tell us, however, that you can't dance in the aisles as those people will have an advantage if it burns down." The second the song kicked-in, the place nearly blew apart. It was a life-affirming moment that felt transcendent beyond compare. The release of emotions that had been bottled up for so long finally were set free with the assistance and power of these remarkable songs, all of which were recreated by a unique band consistently outdoing themselves with brilliant displays of talent. Not only are they stupendous musicians, they're playing polyrhythms while also keeping up with their movements around the stage. Nothing is stationary and there is almost too much happening on stage to fully comprehend just how monumental it is. The night winds down with a striking cover of Janelle Monae's "Hell You Talmbout" (which Byrne says he has her blessings on performing) and demands the crowd chat out the names of those who were murdered by the police. It's a powerful moment that is seared into the mind as the entire band forms a drum line to bring home the triumphant rendition. "One Fine Day" gives things an initial wrap, the glowing a cappella harmonies forcing everyone to devote their full attention, as if time was standing still. Following a quick blackout, the band remerges for "Road to Nowhere," a final phenomenal moment to hit home just how euphoric the show is and to set the final tone. I originally said that anything I could say to describe the show would feel like an understatement and I once again stand by the statement. Summarizing the experience in no way brings it the justice it deserves, but perhaps now more than before, it feels like a cleanse. It's healing. It brings back so many feelings of what we used to love about going out to shows and reminds us that the power and energy of live music can be an ascension to another place and state of mind. Same as it ever was.
Set list:
01 "Here"
02 "I Know Sometimes a Man Is Wrong"
03 "Don't Worry About the Government"
04 "Lazy"
05 "This Must Be the Place (Naïve Melody)"
06 "I Zimbra"
07 "Slippery People"
08 "I Should Watch TV"
09 "Everybody's Coming to My House"
10 "Once in a Lifetime"
11 "Glass, Concrete & Stone"
12 "Toe Jam"
13 "Born Under Punches (The Heat Goes On)"
14 "I Dance Like This"
15 "Bullet"
16 "Every Day Is a Miracle"
17 "Blind"
18 "Burning Down the House"
19 "Hell You Talmbout"
20 "One Fine Day"
--
21 "Road to Nowhere"
Posted by marc at 10:00 AM