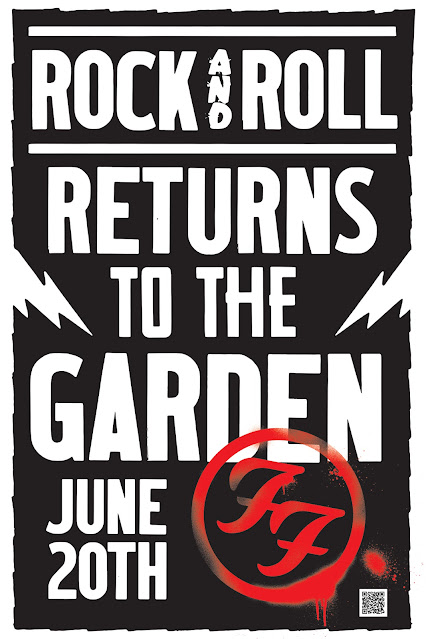 Rock returned to the Garden on June 20 and Foo Fighters did it with absolute power and authority.
The biggest rock band of the last twenty-five years came to the world's most famous arena to play the building's first full-capacity, full-vaccinated event since March 2020. Only announced twelve days prior, this was an all-out party to celebrate re-entering the world and to start getting life, somewhat, back to normal. This was an arena show, but the band didn't rely on wild videos, crazy pyrotechnics, or absurd lighting, but instead, used their own gargantuan riffs and epic sing-a-long moments to fuel the crowd and serve up one of their best shows of all time. The entire night felt electric and as soon as you walked in the building, you could feel the excitement slowly take over your body. As the lights went down, the building errupted in a roar as Dave took centerstage, raised his arms, and basked in the glory of being back onstage. Slowly, notes began to trickle out and the band opened with a truly life-affirming rendition of "Times Like These" and as soon as they got to the lyric "it's times like these, you learn to live again" the entire place rang out with cheer and tears streamed down my face. "This is the moment you've been waiting for, this is the moment we've been waiting for" Grohl cried out and it was clear that the night wasn't just another show for this mighty rock band, but one they'd remember forever as well. Opening with "Times Like These" -> "The Pretender" -> "Learn to Fly" launched the night into the stratosphere and felt like an all out rock and roll assault that instantly exceeded any expectations. The band was on fire and sounded super loud and full of energy. At times, it was harder to tell if the crowd or Dave was more excited for this night to be happening, but regardless, it was clear that it was the most fun any of us had had in quite some time. "We couldn't have made it here without the help of a lot of people. A lot of people out there doing the real work and while we can't say all of their names, we can do this" he proclaimed as the band went into "My Hero," another highly emotional track that started slow before building into a total frenzy. It was a surreal moment, one of many from the night, where I was still in disbelief that it was happening. It felt totally strange, but also perfectly normal all at once. After introducing the band, Dave took a seat behind the drums (something he claimed "isn't that big of a deal anymore") and Taylor Hawkins led the band through a great cover of Queen's "Somebody to Love" before getting back behind the kit to slam into the classic "Monkey Wrench." "We wanted this to be extra special tonight so I'm inviting another Dave up here to sing a song with us" Grohl screamed before Dave Chapelle walked onto the stage to cover Radiohead's "Creep." It was absolute insanity to watch the Garden sing along to every word with Chapelle and if you blinked, you almost could've missed it. "How the hell do I follow-up Chapelle?" other Dave asked just after he left the stage before saying "Oh I know" and ripping into the opening notes of "All My Life." Once again, the arena went insane and shouted along to every single word. Total pandemonium. It was a night of loud ones and they ended the main set with the back-to-back hits "This is a Call" and "Best of You" which once again felt all encompassing and absolutely unreal to hear through the massive speakers of MSG. For the encore, the band kicked off with the opening from their latest album (an underrated track) and then played a cover from their upcoming disco, Bee-Gee tribute record where they've dubbed themselves the Dee-Gees and did a great version of "You Should Be Dancing" to, once again, get their crowd grooving. However, I'm not sure anyone sat for a single second of their three hour set. "It feels so good to be with so many people. When was the last time you were out in a packed place? Let's keep our shit together so we can do this again and not wait two years. I don't ever say goodbye, instead we just say this" and with that, the band went into the euphoric "Everlong" which once again brought tears to my face and for a second it seemed like the entire building would explode. It was pure magic and one of the greatest in my life. "If everything could ever feel this real forever, if anything could ever be this good again." What a lyric to have ringing out to end one of the best comebacks of all time and the most fitting way to reopen an iconic venue. I hope it really does feel this real. Forever.
Set list:
Times Like These
The Pretender
Learn to Fly
No Son of Mine
The Sky Is a Neighborhood
Shame Shame
Rope
Run
My Hero
These Days
Medicine at Midnight
Walk
Somebody to Love [Queen cover]
Monkey Wrench
Arlandria
Breakout
Creep [Radiohead cover] (with Dave Chappelle)
All My Life
Aurora
This Is a Call
Best of You
--
Making a Fire
You Should Be Dancing [Bee Gees cover]
Everlong
Posted by marc at 9:26 AM