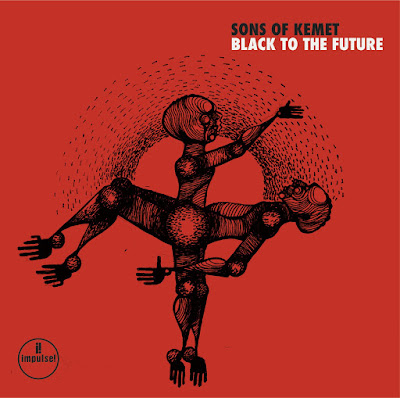 Jazz outfit Sons of Kemet have announced a new record. Black to the Future follows 2018's breakout Your Queen is a Reptile and is out this Spring from legendary jazz label Impulse.
It's been a wild few years to be a fan of Shabaka Hutchings. He's recorded several albums with various groups (Sons of Kemet, The Comet is Coming, and his own name), all of which feel uniquely part of his world, but still feel remarkably fresh. The latest from his group Sons of Kemet is no different. There is the usual skronk from blaring horns, a bit of free-jazz melded with other experimental and boundary pushing stylings. "Hustle" features vocals from Kojey Radical and he delivers an imposing rap over the song's steady stomp. It feels less feverish than the group's past work, but as urgent as ever. “Black to the Future is a sonic poem for the invocation of power, remembrance and healing. It depicts a movement to redefine and reaffirm what it means to strive for black power,” Hutchings said in a press release. “The meaning is not universal and the cultural context of the listener will shape their understanding,” he added. “Yet in the end, the overarching message remains the same: For humanity to progress we must consider what it means to be Black to the Future."
Black to the Future is out on May 14 via Impulse.
Posted by marc at 6:53 PM

Email ThisBlogThis!Share to TwitterShare to FacebookShare to Pinterest
Labels: Sons of Kemet