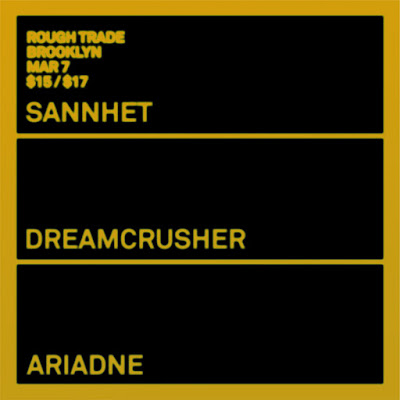 It was a hometown show for Brooklyn's Sannhet as the post-metal band headlined Rough Trade for their first show of the year.

Things have been relatively quiet for Sannhet as of late. Aside from last year's 7" Short Life, it's been a while since we've heard new tunes from the band. Their last full-length was 2017's So Numb and apart from a few gigs here and there, the band's activities have been rather minimal so headlining Rough Trade on a Saturday night felt like a welcomed return. Taking the stage in their typical shroud of darkness, the band had a new drummer in-tow to change up their rhythms without vastly differing their atmospheric swirls of guitar and bass. Their light show was as stylized as ever, new filters washed over the band and stimulating colors gave the trio a whole new look, but still let the music speak for itself. Along with a new drummer came new songs and added blast beats to past favorites. Double bass took hold of many songs and pulverizing fills really showed that the band wasn't messing around. The energy was high and these new features added to the band's dynamics and their already progressive sound. Furious rhythms really took the tracks in new directions, but still held on to their original core carefully blending together Sludge, Noise, and Post-Rock without ever fully committing to any of them. The newfound influences were an added surprise factor to the night, reaffirming the band as one to be taken seriously and with the dexterity to play with such a wide range of other artists. (Dreamcrusher played before them and it was a brutal performance of deafening noise with subtle techno influences performed in total darkness save for a single strobe and a swinging flashlight attached to the artist's microphone.) "You were a Grindcore band tonight" someone uttered to the guitarist after the show adding yet another genre to the ever expanding list. No matter how you'd like to classify the band, they're still one of the most innovating and intoxicating live bands in the city and hopefully they'll share these new tracks with us very soon.
Posted by marc at 9:57 AM