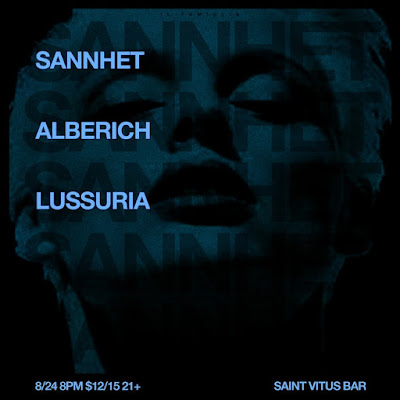 Brooklyn's own Sannhet brought the doom and destruction to Greenpoint's excellent St. Vitus for a Saturday night of extreme pleasures.

By most standards, Sannhet are a metal band. They play loud, atmospheric music that drones before pulverizing listeners with epic blast beats. But most metal bands also feature heavy vocals that often match the intensity of their music. This is where Sannhet veers from their peers. Their particular style, post-metal, if you will feels more like a terrorizing version of Explosions in the Sky and if they make music that turns everyday life into a cinematic, waking dream, Sannhet makes everything sound like a nightmare. That's a good thing though. Their drummer sits front and center as dueling guitars stand on either side crafting soaring surges of powerful melodies that erupt and come crashing down as forceful rhythms drive each track to completion. Their sound is ready for places beyond the small clubs they've been playing for years and their own, DIY light show they've carefully curated over the years is one of the most impressive features of their set. Cutting in at precisely the right moments, taking the experience of their show beyond the pummeling music and transforming it into a total performance that brings the professionalism to another level. This does not feel like a DIY band, but rather one that has seen their own future and aren't willing to wait for someone else to take them there. At just under an hour, their set was short, but sweet and each track really hammered home the band's intent to blast the crowd with fury and force. Unlike some of their post-rock contemporaries, there are no twinkling guitars here, but rather punishing riffs that chug along at raging speeds. Even with the absence of vocals, a Sannhet set isn't for the light hearted. It's an audio assault with the best intentions and sinister results that make the band not only of the most intriguing acts in Brooklyn, but also in the entire metal scene. They can share the stage with such a wide range of artists and never compromise their sound. With each release, they still manage to captivate and create chaos and their shows are a brilliant portrayal of their organized noise.
Posted by marc at 12:55 PM